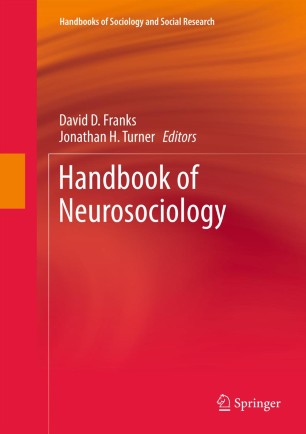 Until recently, a handbook on neurosociology would have been viewed with skepticism by sociologists, who have long been protective of their disciplinary domain against perceived encroachment by biology. But a number of developments in the last decade or so have made sociologists more receptive to biological factors in sociology and social psychology. Much of this has been encouraged by the editors of this volume, David Franks and Jonathan Turner. This new interest has been increased by the explosion of research in neuroscience on brain functioning and brain-environment interaction (via new MRI technologies), with implications for social and psychological functioning. This handbook emphasizes the integration of perspectives within sociology as well as between fields in social neuroscience. For example, Franks represents a social constructionist position following from G.H. Mead’s voluntaristic theory of the act while Turner is more social structural and positivistic. Furthermore, this handbook not only contains contributions from sociologists, but leading figures from the psychological perspective of social neuroscience.

Professor David D. Franks is a Professor of Sociology, who in 1972 received a large Grant from NIE to study the different effects of "open" and traditional Kansas City high schools on self-esteem and the development of personal autonomy. He was also granted tenure and promoted at that time. He served as chair of the faculty grievance committee and as president of the Faculty Senate.

In the summer of 1977 he accepted a position as chair of the department at VCU. In the early 80s, after writing on the usefulness of symbolic interaction in studying a social systems understanding of rape and partner abuse, he worked to develop a new sub-specialty in the Sociology of Emotions. This involved writing articles arguing for the social nature of something that had hitherto for been viewed as exclusively psychological. To this end he was also involved in editing guest issues of journals and an annual hard-back series, Social Perspectives on emotions, as well as several other volumes demonstrating the utility of the sub-field. He was also on numerous steering committees and chaired offices in the early days of the subsection. In the early 80s and early 90s he was vice president of the symbolic interaction national society. He has presented papers at national meetings with Dr. Lyng of this department on the importance of keeping a coherent idea of objectivity in our approaches to the social construction of reality and applying sociology to real world problems. Dr. Franks retired and was appointed Professor Emeritus in 2001.

Jonathan H. Turner is a professor of sociology at University of California, Riverside. After receiving his PhD from Cornell University in 1968, since the academic year 1969-1970 he has been at UCR. He has been Faculty Research Lecturer at UCR, and in the profession, he has been president of the Pacific Sociological Association and California Sociological Association. He is also a Fellow of the American Association for the Advancement of Science. He has lectured widely all over the world, and he has been a visiting professor at Cambridge University, UK, Universitat Bremen, Germany, Universitat Bielefeld, German, Shandong University and Nan Kai University, Peoples Republic at China.

He is known as a general theorist of sociology, although he has a number of specialities: the sociology of emotions, ethnic relations, social institutions, social stratification, and bio-sociology.

He is an author of several books, including textbooks, and articles.