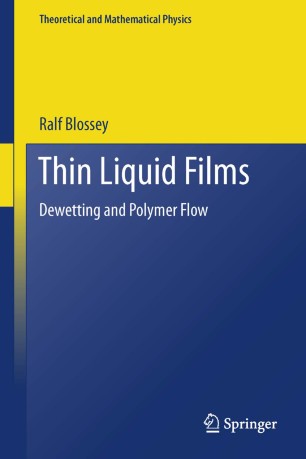 This book is a treatise on the thermodynamic and dynamic properties of thin liquid films at solid surfaces and, in particular, their rupture instabilities. For the quantitative study of these phenomena, polymer thin films haven proven to be an invaluable experimental model system.

What is it that makes thin film instabilities special and interesting, warranting a whole book? There are several answers to this. Firstly, thin polymeric films have an important range of applications, and with the increase in the number of technologies available to produce and to study them, this range is likely to expand. An understanding of their instabilities is therefore of practical relevance for the design of such films.

Secondly, thin liquid films are an interdisciplinary research topic. Interdisciplinary research is surely not an end to itself, but in this case it leads to a fairly heterogeneous community of theoretical and experimental physicists, engineers, physical chemists, mathematicians and others working on the topic. It justifies attempting to write a text which aims at a coherent, theoretical presentation of the field which researchers across their specialised communities might be interested in.

And finally, thin liquid films are an interesting laboratory for a theorist to confront a well-established theory, hydrodynamics, with its limits. Liquids at surfaces take notice of the surface they are placed upon, and this is reflected in their dynamics. And the polymers, when confined to thin films, can imprint molecular properties on the film dynamics.

The material in the book is arranged in two Parts. Part I covers the basics of wetting and dewetting phenomena, and is of interest to researchers working in the field also outside of polymeric systems. It can be read as a brief introduction into the theory of wetting phase transitions. Part II delves exclusively into polymeric thin films, their mathematical description, and the confrontation with experiment.

The present book  attempts to bridge between the ‘light’ and the ‘rigorous’, always with the ambition to enhance insight and understanding - and to not let go the elegance of the theory.

“The text is spread over six chapters with appendices, lists of figures and symbols used, and bibliography. The appendices make the text self-sufficient. A useful aspect for graduate students is the inclusion of tasks in each chapter. … The text is very well written, and the concepts are laid down with clarity. The emphasis is on the reader to appreciate the subject … .” (S. C. Rajvanshi, Zentralblatt MATH, Vol. 1255, 2013)
Buy options