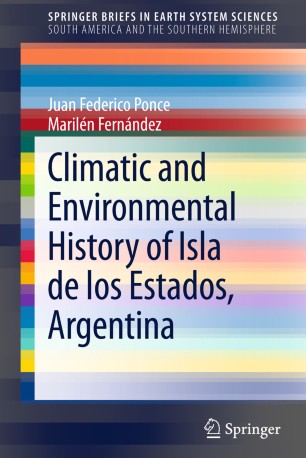 This book is the result of ten years’ of scientific research carried out by the authors on Isla de los Estados. The research includes their doctoral thesis and many published scientific papers related to the island.

The book is divided into two principal parts. The first part covers different social and natural aspects of this remote island and includes chapters on the scientific and historical background, physiography with topographical and hydrographical descriptions, climate and oceanographic circulation, vegetation and geology (including stratigraphy, structural geology and geological history).

The second part comprises a reconstruction of the paleoenvironmental, paleoclimatic and paleogeographic history of the island from the Last Glacial Maximum to the present, correlating with other paleoecological records from the southern part of Isla Grande de Tierra del Fuego and Patagonia. This second part also includes a geomorphological chapter with a characterization of the principal erosive glacial landforms on Isla de los Estados constructed by means of morphometric analysis, inventories, maps, paleogeographic and glacial models, and a paleoecological chapter evaluating the palaeoenvironment and palaeoclimatic conditions that prevailed during the Late Pleistocene-Holocene times based on pollen and diatom analysis from three 14C-dated peat bogs and lakes. Finally, the book concludes with a review of the island’s archaeology and the relationship between the palaeoenvironmental history and human occupation of this island.