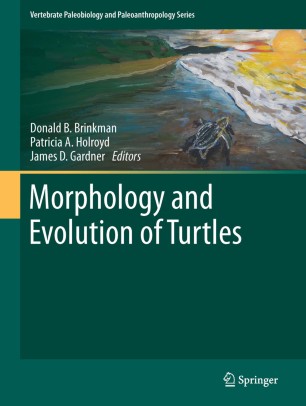 Morphology and Evolution of Turtles

This volume celebrates the contributions of Dr. Eugene Gaffney to the study of turtles, through a diverse and complementary collection of papers that showcases the latest research on one of the most intriguing groups of reptiles. A mix of focused and review papers deals with numerous aspects of the evolutionary history of turtles, including embryonic development, origins, early diversification, phylogenetic relationships, and biogeography. Moreover it includes reports on important but poorly understood fossil turtle assemblages, provides historical perspectives on turtle research, and documents disease and variation in turtles. With its broad scope, which includes descriptions of material and new taxa from Australia, Asia, and Europe, as well as North and South America, this work will be an essential resource for anyone interested in the morphology and evolution of turtles.

“This volume’s breadth of time, geography, and taxonomic coverage makes it a major contribution to the field and a ‘must have’ for all vertebrate paleontologists.”, James F. Parham, California State University, CA, USA

“A comprehensive and sweeping overview of turtle evolution by the top experts in the field that will interest everyone curious about these unique reptiles.” Jason S. Anderson, University of Calgary, Canada

“An invaluable addition to the literature that covers the full spectrum of approaches toward understanding the evolution of these noble creatures.” Ann C. Burke, Wesleyan University, CT , USA

“A truly comprehensive volume that both the student of fossil turtles, as well as the general reader interested in these enigmatic creatures, will find fascinating.” Tyler Lyson, Yale University, CT, USA

Don Brinkman is director of Research at the Royal Tyrrell Museum of Palaeontology. He undertakes research on the taxonomy, biostratigraphy, and distributions of Mesozoic turtles. Turtles are a focus of his research because they offer unique insights into the patterns of distribution of Mesozoic vertebrates in general and the degree to which faunal interchange between separate areas were possible. He am particularly interested in using information from turtles to elucidate questions of interchange between Asia and North America and latitudinal zonation of North America during the Cretaceous.

Jim Gardner is the Curator of Palaeoherpetology at the Royal Tyrrell Museum of Palaeontology in Drumheller, Canada. His research program focuses on the evolutionary history of Mesozoic and Cenozoic lissamphibians, especially those from the North American Western Interior. Jim maintains a sideline interest in turtles, thanks to his MSc study of soft-shelled turtles from the Late Cretaceous of Alberta.

Pat Holroyd is Museum Scientist in the Museum of Paleontology, Berkeley, California. She undertakes research on mammals and reptiles (principally turtles) from the Late Cretaceous and early Paleogene (approximately 70-30 million years ago). For the past ten years, she has maintained an active field program in the Greater Green River Basin of southwestern Wyoming, where the rocks preserve fossil mammals and reptiles from approximately 53 to 50 million years in age. Her research program is centered around understanding the pattern and process of change in the continental biota during warm intervals in the past. This could help us evaluate how long-term climate change may alter the Earth's biota in the future.

“This book describes the latest research on fossil turtles and thus is a substantial addition to the field of vertebrate paleontology. … this work will be an essential resource for all global researchers interested in the morphology and evolution of reptiles, including the most intriguing of them, the turtles. … will be very useful to students, researchers, and scientists in the field of paleontology and biology.” (Rituparna Bose, Priscum, Vol. 21 (1), 2014)

“This massive volume will be a landmark in the study of turtles. … This is a rich resource with many photographs and illustrations and information on the contributions of many earlier students of turtles. It is essentially a book for specialists in turtle anatomy and evolution, but some of the more broadly focused chapters will be of use to many professionals in paleontology and biology, and advanced students in those areas. Summing Up: Recommended. Upper-division undergraduates and above.” (D. Bardack, Choice, Vol. 50 (6), February, 2013).