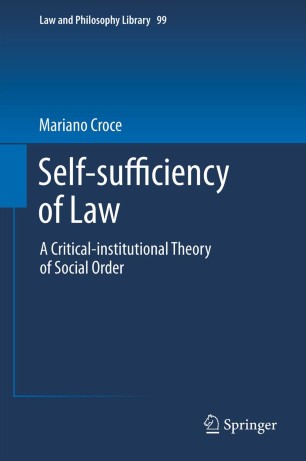 A Critical-institutional Theory of Social Order

Self-sufficiency of Law: A Critical-institutional Theory of Social Order investigates the role of law, legal categories, and legal experts in the organisational dynamics of social collectivities. It demonstrates that law is a stable practice among publicly recognised experts who are called upon to select the ?normative facts? of a population, that is, the set of standards that are proclaimed as binding on the entire collectivity. At the very same time it argues that the legal field also serves as a special trans-sectional and insulated venue in which lay people can renegotiate social reality by means of law?s special stock of knowledge and categories. To do this, the book proposes an integration of the recent research outcomes achieved in three different areas of study, namely, legal positivism, legal institutionalism, and legal pluralism. It examines, among others, the notions of rule, coercion, social practice and institution elaborated on by significant theorists in these fields, highlighting both the merits and flaws and ultimately advancing a notion of law that is able to account for the nature of the legal practice as a basic pillar of social order. This text also covers key guidelines for empirical research and political activities in Western and non-Western countries.

This marvellous book persuasively vindicates the critical role and practicality of pluralist legal theory. It shows in depth and with a solid chain of post-Hartian arguments that there is much more to debate than merely definitions of law. While not an easy read, this is refined legal theory of the highest quality.

This is a work of great erudition. Anyone with an interest in practice theory, socio-legal studies or legal pluralism must read this book.

This book is an excellent contribution to both legal philosophy and the general theory of norms.