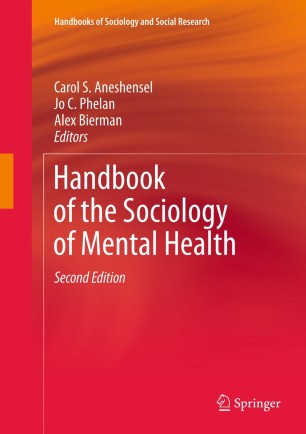 Handbook of the Sociology of Mental Health

The award-winning Handbook is distinctive in its focus on how the organization and functioning of society influences the occurrence of mental disorder and its consequences. A core issue that runs throughout the text concerns the differential distribution of mental illness across various social strata, defined by status characteristics such as gender, race/ethnicity, socioeconomic status, and age. The contributions to this volume shed light on the social, cultural, and economic factors that explain why some social groups have an elevated risk of disorder. They also address the social repercussions of mental disorder for  individuals, including stigmatization within the larger society, and for their families and social networks.

Carol S. Aneshensel is Professor, Department of Community Health Sciences at the Fielding School of Public Health, University of California, Los Angeles.  She specializes in the fields of the sociology of mental health and medical sociology, with an emphasis on the social origins of stress and its impact on depression. Her work spans the life course from adolescence through advanced old age. Her most recent work examines the linkages between the socioeconomic stratification and racial/ethnic segregation of neighborhoods and mental health.  She has received the Leonard I. Pearlin Award for distinguished contributions to the sociological study of mental health and the Leo G. Reeder Award for distinguished contributions to medical sociology from the American Sociological Association.

Jo C. Phelan is Professor of Sociomedical Sciences and Co-Director of the Center for the Study of Social Inequalities and Health at the Mailman School of Public Health at Columbia University. Her broad research focus is on social inequalities, particularly on the interplay between social structural conditions and social psychological processes in producing, maintaining or changing those inequalities. Her current research interests include socioeconomic inequalities as “fundamental causes” of inequalities in health and mortality; public conceptions of mental illness; and stigma, particularly stigma associated with mental illnesses.

Alex Bierman is Assistant Professor in the Department of Sociology at the University of Calgary.  His research is broadly concerned with using mental health as a means to illustrate the importance of structural arrangements for individuals’ lives.  His current research interests include examining how social statuses and a life course context intersect to shape the relationship between stressors and mental health.  An additional area of inquiry focuses on exploring the social and psychological mechanisms that may help to explain the relationship between religious involvement and mental health.

“Aneshensel, Phelan, and Bierman have compiled an anthology of academic essays showing how mental illness plays out within these social spaces … . the handbook project is readable, and as comfortable with theory as with the complex human qualities of mental illness. Summing Up: Highly recommended. All levels/libraries.” (E. A. Danto, Choice, Vol. 51 (6), February, 2014)