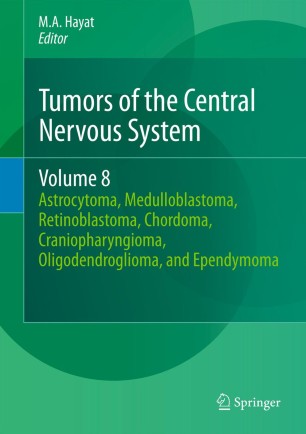 Part of the Tumors of the Central Nervous System book series (TCNS, volume 8)

With tens of thousands of new CNS tumor cases each year in the US alone, this series of publications is a valuable aid to the diagnosis and treatment of these problematic neoplasms. Now, the eighth in the set returns to the topic of brain tumors, dealing with seven distinct types: astrocytoma, medulloblastoma, retinoblastoma, chordoma, craniopharyngioma, oligodendroglioma, and ependymoma. After updating the classification of medulloblastoma the volume provides an overview of ependymoma as well as describing the delineation of prognosis based on the genetic aberrations of the latter patients. The material offers key insights into the molecular pathways involved in tumor biology, such as the role of E-cadherin gene instability, carbonic anhydrase II, urokinase plasminogen activator, and Wnt signaling in meningioma.

Contributors explain the genetic and clinical features associated with recurring meningioma, including the role played by erythropoietin receptor, and examine the way in which OTX2 transcription factor functions as an oncogene in medulloblastoma. With much more besides, including discussion of the molecular mechanisms that result in resistance to chemotherapy in medulloblastoma, this volume and its companions have a positive role to play in inspiring a new generation of researchers to design new drugs that are better targeted—and thus more effective.

“This volume in the series, Tumors of the Central Nervous System, explores recent developments in tumor biology and newer classification and treatment information for seven distinct types of brain tumors. … The book is written for oncologists, both fellows and practitioners, neuro-oncologists, neurologists, neuropathologists, and neurosurgeons. … In addition to providing an update, the book can also inspire a new generation of researchers in tumor biology and in the design of more effective and scientifically based chemotherapy.” (Ramsis Farid Ghaly, Doody’s Review Service, October, 2012)
Buy options