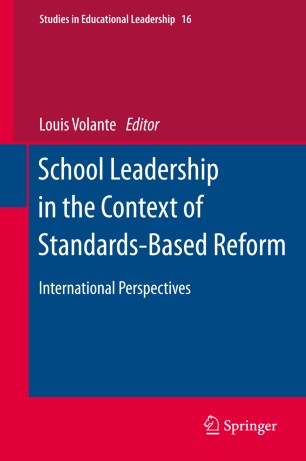 School Leadership in the Context of Standards-Based Reform

“Although standards-based reform emerged in the United States and the United Kingdom, the idea has spread across the world, as an approach to systemic reform.  It might appear that there is a world-wide “tsunami” of standards-based reform that will standardize and homogenize the educational system across the globe. This volume makes it very clear, however, that there is no one approach to standards-based reform and countries change – there is a danger in paying attention to its evolution and impact in only one context.  That’s what makes this volume so valuable.  Louis Volante has drawn together descriptions from a wide range of countries, all involved in large-scale reform and using standards and assessments as part of their process.  What becomes very obvious is that the language may be the same but the words reflect different contexts and can represent very different ideals, values, and processes. I’m sure you will find this book as interesting and challenging as I have – a gem that pushes your thinking and does not allow readers to remain neutral.” (Lorna Earl)