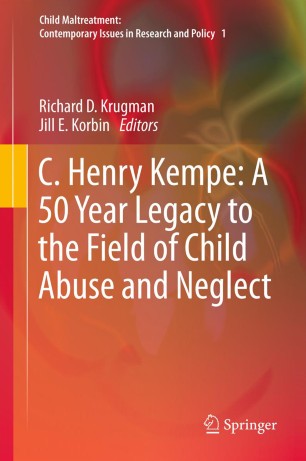 C. Henry Kempe: A 50 Year Legacy to the Field of Child Abuse and Neglect

This volume is the first book in the new series, Child Maltreatment: Contemporary Issues in Research and Policy. This first volume focuses on the legacy of the work of C. Henry Kempe, M.D., the pediatrician widely credited with galvanizing public and private attention to abused and neglected children. 2012 marks 50 years after the appearance of the foundational article by C. Henry Kempe and his colleagues. “The Battered- Child Syndrome.” This volume capitalizes on this 50 years anniversary to stand back and assess the field from the perspective of Dr. Kempe's early contributions that are still being played out in research, practice and policy today. Dr Kempe produced many influential publications. The volume uses four key publications to solicit commentary and reflection on the field.

Jill E. Korbin, Ph.D. is Associate Dean, Professor of  Anthropology, Director of the Schubert Center for Child Studies, and Co-Director of the Childhood Studies Program in the College of Arts and Sciences at Case Western Reserve University. Korbin earned her Ph.D. in 1978 from the University of California at Los Angeles. Her awards include the Margaret Mead Award (1986) from the American Anthropological Association and the Society for Applied Anthropology; a Congressional Science Fellowship (1985-86 in the Office of Senator Bill Bradley) through the American Association for the Advancement of Science and the Society for Research in Child Development; the Wittke Award for Excellence in Undergraduate Teaching at Case Western Reserve University (1992); and a Fulbright Senior Specialist Award (2005).  Korbin served on the National Research Council’s Panel on Research on Child Abuse and Neglect, and the Institute of Medicine’s Panel on Pathophysiology and Prevention of Adolescent and Adult Suicide. Korbin served for multiple years on the Executive Committee of the International Society for Prevention of Child Abuse and Neglect (ISPCAN), and as an Associate Editor, Book Review Editor, or Editorial Board Member for Child Abuse and Neglect: The International Journal. Korbin has published numerous articles on child maltreatment in relationship to culture and context, and edited the first volume on culture and child maltreatment, Child Abuse and Neglect: Cross-Cultural Perspectives (1981, University of California Press.)  Korbin’s research interests include culture and human development; cultural, medical and psychological anthropology; neighborhood, community, and contextual influences on children and families; child maltreatment; and child and adolescent well-being.

Richard D. Krugman, MD, is Professor of Pediatrics, Vice Chancellor for Health Affairs and Dean of the University of Colorado School of Medicine. He served as Director of the C. Henry Kempe National Center for the Prevention and Treatment of Child Abuse and Neglect from 1981-1992, and has gained international prominence in the field of child abuse. Dr. Krugman is a graduate of Princeton University and earned his medical degree at New York University School of Medicine.  A board-certified pediatrician, he did his internship and residency in pediatrics at the University of Colorado School of Medicine.  Following a two-year appointment in the early 1970s with the Public Health Service at the National Institute of Health and the Food and Drug Administration, Dr. Krugman joined the CU faculty in 1973.  He went back to the Washington area in 1980 as a Robert Wood Johnson Health Policy Fellow and served for a year as a legislative assistant in the office of U.S. Senator Dave Durenberger of Minnesota.    He has earned many honors in the field of child abuse and neglect, and headed the U.S. Advisory Board of Child Abuse and neglect from 1988-1991.  Dr. Krugman is a member of the Institute of Medicine (IOM) and has authored over 100 original papers, chapters, editorials and four books and stepped down after 15 years as Editor-in-Chief of Child Abuse and Neglect: the International Journal in 2001.

“The first volume of a new Series ‘Child Maltreatment: Contemporary Issues in Research and Policy’ focuses on the work of Henry Kempe the pediatrician who drew attention to child neglect and abuse (The Battered Child). … To be read by all pediatricians in practice, social workers and public health workers caring for children. Also of interest to law makers.” (Pediatric Endocrinology Reviews (PER), Vol. 10 (2), 2013)
Buy options