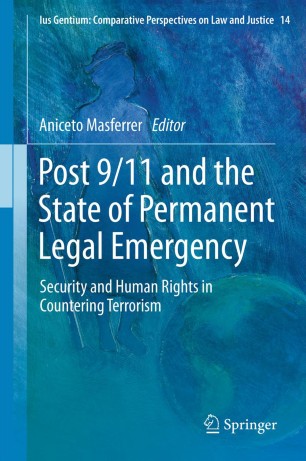 The terrorist attacks which occurred in the United States on 11 September 2001 have profoundly altered and reshaped the priorities of criminal justice systems around the world. Atrocities like the 9/11 attacks, the Madrid train bombings of March 2004, and the terrorist act to the United Kingdom of July 2005 threatened the life of democratic nations as well as its residents.
This book is devoted to exploring a problem which has been recurrent at times of crisis and must be constantly deliberately as new threats emerge: the necessity of limiting State power to protect individuals, including non-citizens. Accordingly, it is important to recognize human rights which exist prior to the State. These pre-political or natural rights lie beyond the siren song of sovereignty and are not negotiable whether through legislation, executive power (or otherwise). Protecting these rights, as conceived in law, curtails the excessive exercise of State power. The recognition of the pre-political character of human rights poses objective limits both to the State itself and to the exercise of State authority, precluding in the 9/11 era for all States sooner or later (later for the militarily mighty) counter terrorism tactics which involve unending and capricious derogations from rights or even the setting aside of non-derogable rights.
In countering terrorism, the State is not allowed to exercise unrestrained power.  It may not rely on a supposed national or popular sovereignty or even on the legitimacy of the democratic process. While establishing limits on State power and lawmaking may not completely resolve the complex relationship between national security and the protection of fundamental rights, it may moderate the State’s often excessive utilitarian approach which, focusing more on the quantum than on quod, ignores the pre-political dimension of human rights and trivializes – if not ignores – the dignity of each human being, leaving him/her unprotected from the absolute power of Leviathan.