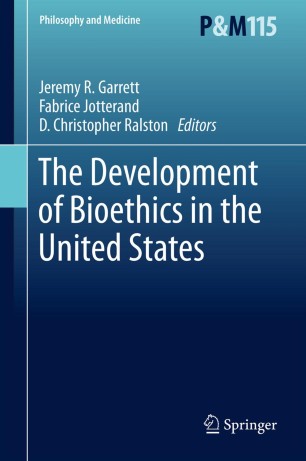 The Development of Bioethics in the United States

Part of the Philosophy and Medicine book series (PHME, volume 115)

In only four decades, bioethics has transformed from a fledgling field into a complex, rapidly expanding, multidisciplinary field of inquiry and practice.  Its influence can be found not only in our intellectual and biomedical institutions, but also in almost every facet of our social, cultural, and political life. This volume maps the remarkable development of bioethics in American culture, uncovering the important historical factors that brought it into existence, analyzing its cultural, philosophical, and professional dimensions, and surveying its potential future trajectories.  Bringing together a collection of original essays by seminal figures in the fields of medical ethics and bioethics, it addresses such questions as the following:

- Are there precise moments, events, socio-political conditions, legal cases, and/or works of scholarship to which we can trace the emergence of bioethics as a field of inquiry in the United States?

- What is the relationship between the historico-causal factors that gave birth to bioethics and the factors that sustain and encourage its continued development today?

- Is it possible and/or useful to view the history of bioethics in discrete periods with well-defined boundaries?

- If so, are there discernible forces that reveal why transitions occurred when they did? What are the key concepts that ultimately frame the field and how have they evolved and developed over time?

- Is the field of bioethics in a period of transformation into biopolitics?