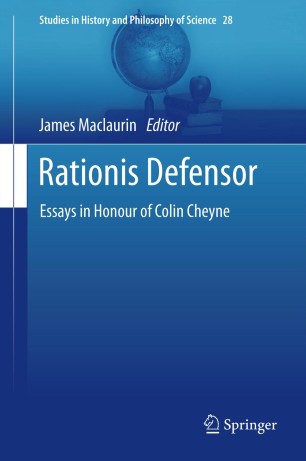 Essays in Honour of Colin Cheyne

Part of the Studies in History and Philosophy of Science book series (AUST, volume 28)

Rationis Defensor is  a volume of previously unpublished essays celebrating the life and work of Colin Cheyne. Colin was until recently Head of the Department of Philosophy at the University of Otago, a department that can boast of many famous philosophers among its past and present faculty and which has twice been judged as the strongest research department across all disciplines in governmental research assessments. Colin is the immediate past President of the Australasian Association for Philosophy (New Zealand Division). He is the author of Knowledge, Cause, and Abstract Objects: Causal Objections to Platonism (Springer, 2001) and the editor, with Vladimir Svoboda and Bjorn Jespersen, of Pavel Tichy’s Collected Papers in Logic and Philosophy (University of Otago Press, 2005) and, with John Worrall, of Rationality and Reality: Conversations with Alan Musgrave (Springer, 2006).

The volume celebrates the dedication to rational enquiry and the philosophical style of Colin Cheyne. It also celebrates the distinctive brand of naturalistic philosophy for which Otago has become known. Contributors to the volume include a wide variety of philosophers, all with a personal connection to Colin, and all of whom are, in their own way, defenders of rationality.

“This collection of recent philosophical papers … provides a nice selection of the current debates and crucial issues at play in philosophy. … To the potential reader this collection contains a solid sampling of modern philosophy that showcases a strong defence of rationality and the progress made in the philosophical method. … If you are interested in reading an example of what philosophers have been up to lately then pick up a copy of Rationis Defensor. You will not be disappointed.” (Charles Gibson, Scoop Review of Books, February, 2013)