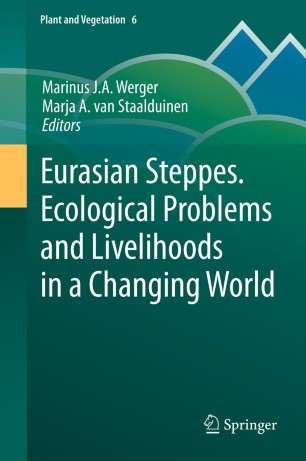 Eurasian Steppes. Ecological Problems and Livelihoods in a Changing World

Part of the Plant and Vegetation book series (PAVE, volume 6)

Steppes form one of the largest biomes on earth. Ecological changes came slowly, and nomadic pastoralism long predominated in the steppes. As from the mid-18th century the rate of change increased, and drastic changes in steppe ecology, land use and livelihoods in the steppe came with the emergence, and again with the collapse, of communist states. Excessive ploughing and vast influx of people led to a strong decline in nomadic pastoralism in the Soviet Union and China and resulted in severely degraded steppe ecosystems. After the collapse of the Soviet Union huge tracts of ploughed land became fallow and steppe ecosystems regenerated. In Mongolia nomadic pastoralism persisted, but steppes degraded because of strong increases in livestock loads. Presently, new, restorative land management schemes are developed and applied. On top of all these changes in steppe land use come the effects of climate change, which are strong in the northern zone of the steppe region.

This book reviews the ecology of steppe ecosystems in the entire Eurasian area, discusses the effects of climatic changes and land use policies that are playing important roles in these steppes, and shows how the livelihoods of people in the steppe zone are affected. It provides, in English, an extensive and up-to-date overview of steppe status and steppe problems in all of Eurasia, based on the experience of many specialists, and it integrates extensive data sources that so far were only available in a spectrum of locally used languages.