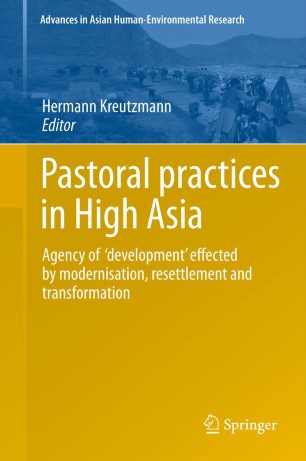 Agency of 'development' effected by modernisation, resettlement and transformation

In conventional views, pastoralism was classified as a stage of civilization that needed to be abolished and transcended in order to reach a higher level of development. In this context, global approaches to modernize a rural society have been ubiquitous phenomena independent of ideological contexts. The 20th century experienced a variety of concepts to settle mobile groups and to transfer their lifestyles to modern perceptions. Permanent settlements are the vivid expression of an ideology-driven approach. Modernization theory captured all walks of life and tried to optimize breeding techniques, pasture utilization, transport and processing concepts.
New insights into other aspects of pastoralism such as its role as an adaptive strategy to use marginal resources in remote locations with difficult access could only be understood as a critique of capitalist and communist concepts of modernization. In recent years a renaissance of modernization theory-led development activities can be observed. Higher inputs from external funding, fencing of pastures and settlement of pastoralists in new townships are the vivid expression of 'modern' pastoralism in urban contexts. The new modernization programme incorporates resettlement and transformation of lifestyles as to be justified by environmental pressure in order to reduce degradation in the age of climate change.