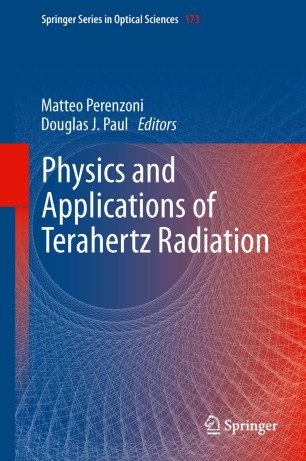 Physics and Applications of Terahertz Radiation

This book covers the latest advances in the techniques employed to manage the THz radiation and its potential uses. It has been subdivided in three sections: THz Detectors, THz Sources, Systems and Applications. These three sections will allow the reader to be introduced in a logical way to the physics problems of sensing and generation of the terahertz radiation, the implementation of these devices into systems including other components and finally the exploitation of the equipment for real applications in some different field. All of the sections and chapters can be individually addressed in order to deepen the understanding of a single topic without the need to read the whole book.

The Systems and Applications section will take care of introducing many of the aspects needed to move from a device to an equipment perspective: control of terahertz radiation, its use in imaging or in spectroscopy, potential uses in security, and will address also safety issues.

The text book is at a level appropriate to graduate level courses up to researchers in the field who require a reference book covering all aspects of terahertz technology.

Matteo Perenzoni received the Laurea degree in Electronics Engineering from the University of Padua, Padua, Italy, in 2002. In 2002, he was with the University of Padua, working on the design of integrated circuit for analog channel decoders. Since January 2004, he has been with the Center for Materials and Microsystems of the Fondazione Bruno Kessler (FBK-CMM), Trento, Italy, as a Researcher working in the Smart Optical Sensors and Interfaces research unit. He is in charge of the research line taking care of readout circuits and interfaces for X-ray, infrared and THz sensors. He collaborates on teaching courses of electronics and sensors for the ICT Doctoral School, Trento. He has been Director of 6th Optoelectronics and Photonics Winter School – Physics and Applications of T-Rays. He is reviewer for several scientific journals on integrated circuits and sensors. His research interests include the design of advanced vision sensors for X-ray, visible, infrared, and terahertz wavelengths, as well as modeling and optimization of analog integrated circuits.

Douglas Paul has an MA degree in Physics and Theoretical Physics and a PhD from the Cavendish Laboratory, University of Cambridge. He is a Fellow of the Royal Society of Edinburgh, a Fellow of the Institute of Physics, a chartered physicist, a Senior Member of the IEEE, was a Fellow of St. Edmund's College in Cambridge, an EPSRC Advanced Fellowship and managed all the Si/SiGe research in the Cavendish Laboratory before taking up a Professorial position at the University of Glasgow in 2007. He has or presently sits on a number of government department advisory committees including the Home Office, DTI Foresight , Government Office of Science , the Defence Scientific Advisory Council and was the U.K. representative to the NATO CBP Science Panel between 2004 and 2008. He was one of the editors for the 1st Technology Roadmap on European Nanoelectronics, a significant part of which is now in the ITRS Roadmap Future Emerging Technology section and gave evidence at the House of Lords to the Lords Select Committee panel on 'Chips for Everything'. He sits on the scientific, programme and / or organising committees for a number of international conference series including the International IEEE LEOS Conference on Group IV Photonics, the International SiGe Technology and Device Meeting, the Electrochemical Society SiGe Conferences and the International Conference on Silicon Epitaxy and Heterostructures. Prof Paul is on the Editorial Board of the IoP Semiconductor Science and Technology journal. His research interests include Si/SiGe heterostructures, CMOS, quantum cascade lasers, quantum devices, silicon photonics, terahertz systems, inorganic molecular electronics and thermoelectrics.