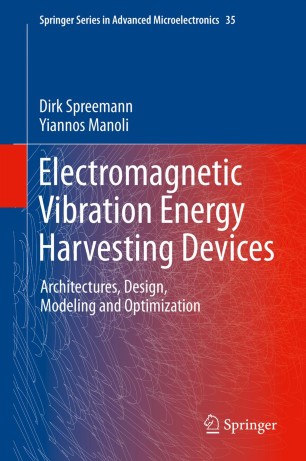 Electromagnetic vibration transducers are seen as an effective way of harvesting ambient energy for the supply of sensor monitoring systems. Different electromagnetic coupling architectures have been employed but no comprehensive comparison with respect to their output performance has been carried out up to now. Electromagnetic Vibration Energy Harvesting Devices introduces an optimization approach which is applied to determine optimal dimensions of the components (magnet, coil and back iron). Eight different commonly applied coupling architectures are investigated. The results show that correct dimensions are of great significance for maximizing the efficiency of the energy conversion. A comparison yields the architectures with the best output performance capability which should be preferably employed in applications. A prototype development is used to demonstrate how the optimization calculations can be integrated into the design–flow. Electromagnetic Vibration Energy Harvesting Devices targets the designer of electromagnetic vibration transducers who wishes to have a greater in-depth understanding for maximizing the output performance.

Dirk Spreemann received the Dipl.-Ing. (FH) degree in Physical engineering from the University of Applied Sciences Ravensburg-Weingarten, in 2005. His diploma thesis focused on miniaturized electromagnetic vibration transducers. Beside the resonant vibration conversion he established one of the first non-resonant conversion mechanisms. While studying Microsystems engineering at the University of Freiburg he worked as a research engineer in the “Energy autonomous systems” group at the Institute of Micromachining and Information Technology HSG-IMIT in Villingen-Schwenningen. In this position he gained considerable experience in developing customized vibration transducers for industrial applications. His research interests lie in the area of micro power generation with a special focus on electromagnetic vibration conversion. In 2011 he received the Dr.-Ing. degree from the University of Freiburg.

Yiannos Manoli holds the Fritz Huettinger Chair of Microelectronics at the Department of Microsystems Engineering (IMTEK), University of Freiburg, Germany. Since 2005 he additionally serves as director of the applied research “Institute of Micromachining and Information Technology” of the “Hahn-Schickard Gesellschaft” (HSG-IMIT).

His research interests are the design of low-voltage and low-power mixed-signal systems with over 300 papers published in these areas. The emphasis lies in Analog-to-Digital converters as well as in energy harvesting and sensor read-out CMOS circuits. Additional research activities concentrate on motion and vibration energy transducers and on inertial sensors.

Prof. Manoli received Best Paper Awards from ESSCIRC 2010 and 1988, MWSCAS 2007, MSE 2007, and PowerMEMS 2006. For his creative and effective contributions to the teaching of microelectronics and the design of a web-based animation and visualization of analog circuits (Spicy VOLTsim, www.imtek.de/svs) he received various awards including the Excellence in Teaching Award of the University of Freiburg and the Teaching Award of the State of Baden-Württemberg, both in 2010.

Professor Manoli is a Distinguished Lecturer of the IEEE. He is on the Senior Editorial Board of the IEEE “Journal on Emerging and Selected Topics in Circuits and Systems” and on the Editorial Board of the “Journal of Low Power Electronics”. He served as guest editor of the “Transactions on VLSI” in 2002 and the “Journal of Solid-State Circuits” in 2011. Professor Manoli has served on the committees of a number of conferences such as ISSCC, ESSCIRC, IEDM and ICCD, and was Program Chair (2001) and General Chair (2002) of the IEEE International Conference on Computer Design (ICCD).