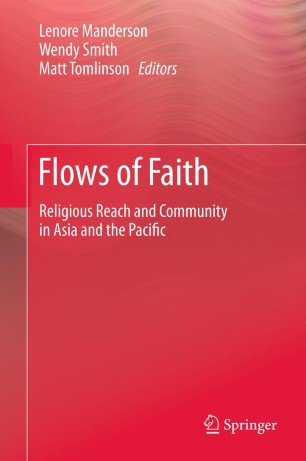 Religious Reach and Community in Asia and the Pacific

Unique local transformations of the practice of established religions in Asia and the Pacific are juxtaposed with the emergence of new religious movements whose incidence is growing across the region.  In Flows of Faith, the contributing authors take as their starting point questions of how religions manifest outside their cultural boundaries and provide the basis for new social identities, political movements and social transformations.

With fresh insights into the globalization of beliefs, their local inflections, and their institutionalization, the authors explore how old and new religions work in different settings, and how their reception and membership challenge orthodox understandings of religion and culture.

The chapters – set in Asia, the Pacific, Australia, and the US – illustrate the contrasts and commonalities of these belief systems, and their allegiances and networks in the region and beyond. They include new religious movements – Falun Gong, Brahma Kumaris, the Hare Krishna movement, based in East and South Asia with outreach posts in Australia and the U.S. –  and established ‘old’ religions – Christianity, Buddhism, Hinduism and Islam – that are revitalized and recreated in different settings and places.

Flows of Faith describes the transnational reaches of faith.  Religious practices and their local manifestations track the movement of peoples, through mission outreach, flight, migration, and pilgrimage. In each new setting, religions are shaped by and in turn shape political and cultural forces, proving that they are resilient and generative, originary and distinctive.

The volume is a major contribution, providing readers with a fresh and creative approach into the living experience of religious communities in a contemporary globalised world.

Lenore Manderson is an inaugural ARC Federation Fellow and Professor of Medical Anthropology at Monash University. She has conducted research in anthropology, social history and public health in Australia, South East and East Asia, and Africa, and has a broad interest in social inclusion, inequality,  health, illness and wellbeing, and the social and political-economic factors that shape the human condition. She is co-editor of Chronic Conditions, Fluid States (2010) and author, among other works, of Surface Tensions (2011).

Wendy Smith is Director of the Centre for Malaysian Studies, Monash Asia Institute, and Senior Lecturer, Department of Management, Faculty of Business and Economics, Monash University. She has conducted extensive research in both Malaysia and Japan, and has research interests in cross-cultural management, employee relations in Asia, Japanese management transfer, international business, social protection in Malaysia, globalized religious organizations, managing religious diversity in the workplace, and  Islamic work ethics.

Matt Tomlinson is a lecturer in anthropology at Monash University. He is the author of In God’s Image: The Metaculture of Fijian Christianity (University of California Press, 2009) and co-editor of The Limits of Meaning: Case Studies in the Anthropology of Christianity (Berghahn, 2006).

"the living edge of religious and spiritual development in the world"