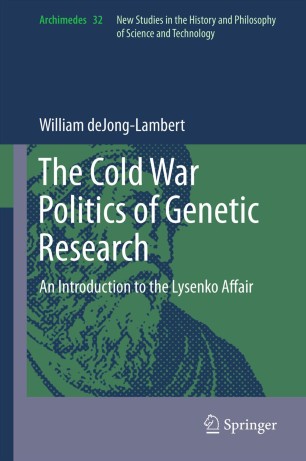 An Introduction to the Lysenko Affair

This book uses the reaction of a number of biologists in the United States and Great Britain to provide an overview of one of the most important controversies in Twentieth Century biology, the “Lysenko Affair.” The book is written for advanced undergraduate and graduate students of history/history of science. It covers a number of topics which are relevant to understanding the sources and dimensions of the Lysenko controversy, including the interwar eugenics movement, the Scopes Trial, the popularity of Lamarckism as a theory of heredity prior to the synthesis of genetics and Natural Selection, and the Cold War. The book focuses particularly on portrayals—both positive and negative—of Lysenko in the popular press in the U.S. and Europe, and thus by extension the relationship between scientists and society. Because the Lysenko controversy attracted a high level of interest among the lay community, it constitutes a useful historical example to consider in context with current topics that have received a similar level of attention, such as Intelligent Design or Climate Change.