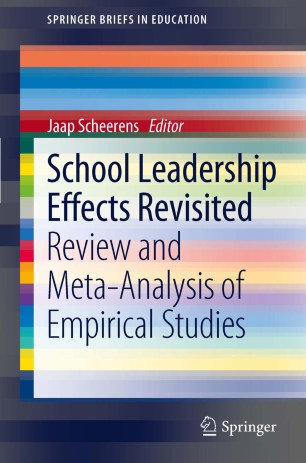 Review and Meta-Analysis of Empirical Studies

This highly detailed study maps four decades of evolution of the concept of what constitutes effective school leadership. It analyses the theoretical background to these developments and advocates the utility of thinking of a ‘lean’ form of school leadership that is comparable to the concept of ‘meta-control’. A wide-ranging survey of the empirical research literature on leadership effects includes the presentation of results from earlier meta-analyses as well as a new meta-analysis on some 25 studies carried out between 2005 and 2010. This survey demonstrates that older reviews and meta-analyses were predominantly based on so-called ‘direct effect’ studies, while more recent studies have tried to quantify the indirect effects of leadership, mediated by other school variables.

While acknowledging the relatively small total effect of leadership on student outcomes, the study does identify promising intermediary factors which, stimulated by specific leadership behaviours, impact on student performance. The book ends by drawing out wider implications for educational practice and policy, presented under headings such as ‘schools need leadership’, ‘the toolkit of the school leader as a meta-controller’, ‘the special case of turning around failing schools’ and ‘efficiency of school leadership’. In passing, the authors make several suggestions about potentially fruitful next steps in researching the effects of school leadership.