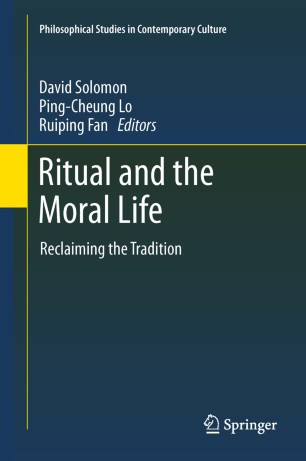 Ritual and the Moral Life

In the twentieth century, in both China and the West, ritual became marginalized in the face of the growth of secularism and individualism. In China, Confucianism and its essentially ritualistic comportment to the world were vigorously suppressed during the Cultural Revolution (1966-1976) under Mao Zedong. But de-ritualization already took place as a result of the Chinese Revolution of 1911 under Sun Yat-Sen. In the West, while the process of de-ritualization has been generally more gradual, it has been nonetheless drastic. In contrast to this situation, this volume investigates the crucial role ritual plays in constituting the human understanding of their place in the cosmos, the purpose of their lives, and imbues human existence with a more complete sense of meaningfulness.

This volume presents the work of philosophers from both China and the West as they reflect upon the constitutive role that ritual plays in human life. They reflect not only on ritual in general but also on specific Confucian and Christian appreciations of ritual.

This provocative volume is a beacon of warning to Western philosophers, who think they have graduated from the trappings of ritual, and a beacon of hope for Eastern thinkers, who wish to avoid cultural fragmentation. The Editors, both Eastern and Western, have together created a seamless work that not only introduces ritual, but advances an argument for the contribution that ritual makes to cultural renewal. This volume is a work of philosophical thinking about ritual doing, but challenges those who think to realize that the salvation of philosophical thinking rests in the particularity and contingency of ritual doing. Let us hope this volume is widely read, for it points to that which might renew the West.