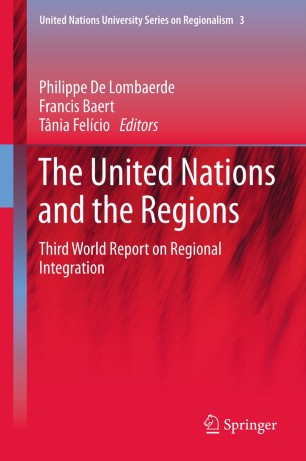 The United Nations and the Regions

This unique book investigates the implications of the rising importance of supra-national regional organizations for global governance in general, and for the United Nations, in particular. It touches upon issues such as regional representation at the UN, high-level dialogues with regional organisations, as well as the coordination of UN member states’ voting behaviour in the UN General Assembly and the UN Security Council. The book further explores the regional dimension and coordination of UN operations in areas such as peace and security, human rights, and sustainable development. The contributions to the book are both in-depth chapters and shorter viewpoints, written by a combination of academics, policy-makers at regional organizations, and experts from international think tanks. The book is essential reading for anyone interested in the future of global governance.

“[...] new avenues for joint action between the League and the UN shall continue to be explored. The ultimate goal remains [...] the wider coherence of the constructive relationship between the UN and regional organisations.

Amre Moussa, Secretary-General of the League of Arab States

“[...] with due regard to to the political sensitivities of the challenge, it is possible to engage in reform of the UN whereby greater consistency and coherence can be attained to streamline the operational partnership between the UN and regional organisations.”