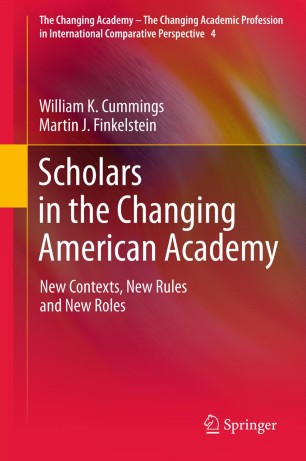 Scholars in the Changing American Academy

As the nature of education generally, and higher education in particular, changes irrevocably, it is crucial to understand the informed opinions of those closest to the institutions of learning. This book, based on a survey of academics in 19 nations and conducted by leading global scholars, is a thorough sounding of the attitudes of academics to their working environment. As the post-WWII liberal consensus crumbles, higher education is increasingly viewed as a private and personal investment in individual social mobility rather than as a public good and, ipso facto, a responsibility of public authorities. The incursion of corporate culture into academe, with its ‘stakeholders’, ‘performance pay’ and obsession with ‘competitiveness’ is a matter of bitter debate, with some arguing that short-termism is obviating epoch-making research which by definition requires patience and persistence in the face of the risk of failure.

This book highlights these and many other key issues facing the academic profession in the US and around the world at the beginning of the 21st century and examines the issues from the perspective of those who are at the front line of change. This group has numerous concerns, not least in the US, where government priorities are shifting with growing budget pressures to core activities such as basic education, health and welfare. Drawing too on comparable surveys conducted in 1992, the book charts the actual contours of change as reflected in the opinions of academics. Critically, the volume explicitly compares and contrasts the situation of American academics with that of academics in other advanced and developing economies. Such an assessment  is critical both for Americans to chart the future of their indigenous tertiary enterprise, but also for shaping the response of the nations around the world who contemplate applying the American model to their own national systems.

“This book reports on the 2007­–2008 Changing Academic Profession (CAP) Survey using inter-country comparisons, and including longitudinal changes since the 1992 Carnegie International Survey of the Academic Profession. … the volume provides a wealth of information that can be mined by researchers working in the field … . it has an easy narrative style, reinforced by a helpful summary for readers at the end of each chapter.” (Celia Whitchurch, Higher Education, Vol. 66, 2013)
Buy options