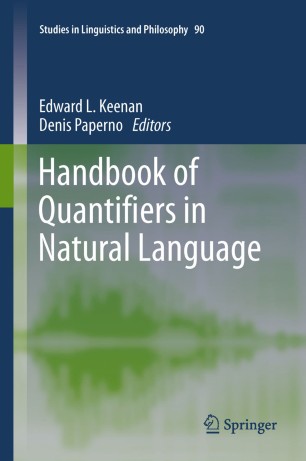 Handbook of Quantifiers in Natural Language

Part of the Studies in Linguistics and Philosophy book series (SLAP, volume 90)

Edward L. Keenan is Distinguished Professor of linguistics at theUniversity of California at Los Angeles.  He received his PhD in Formal Linguistics from The University of Pennsylvania in 1969 for a thesis on A Presupposition Logic for Natural Language.  He is a member of the American Academy of Arts and Sciences as well as the American Association for the Advancement of Science.   He has published in numerous areas of linguistics, including syntactic typology, formal semantics, theoretical syntax, historical syntax, and Austronesian linguistics. He has co-authored two books:  Boolean Semantics for Natural Language (1985), with Leonard Faltz, and Bare Grammar: Lectures on Linguistic Invariants, with Edward P. Stabler (2003).

Denis Paperno is a graduate of the Moscow State University andcurrently a PhD candidate at the University of California at Los Angeles.  He has done fieldwork in the Komi Republic, the Udmurt Republic, the Caucasus, and W. Africa and has written a grammar of Beng  (Mande; Côte d'Ivoire) (in Russian).  In addition to African linguistics he has published in semantics and syntactic typology.