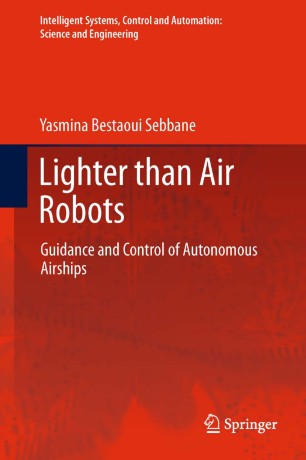 Guidance and Control of Autonomous Airships

An aerial robot is a system capable of sustained flight with no direct human control and able to perform a specific task. A lighter than air robot is an aerial robot that relies on the static lift to balance its own weight. It can also be defined as a lighter than air unmanned aerial vehicle or an unmanned airship with sufficient autonomy. Lighter than air systems are particularly appealing since the energy to keep them airborne is small. They are increasingly considered for various tasks such as monitoring, surveillance, advertising, freight carrier, transportation.

This book familiarizes readers with a hierarchical decoupled planning and control strategy that has been proven efficient through research. It is made up of a hierarchy of modules with well defined functions operating at a variety of rates, linked together from top to bottom. The outer loop, closed periodically, consists of a discrete search that produces a set of waypoints leading to the goal while avoiding obstacles and weighed regions. The second level smoothes this set so that the generated paths are feasible given the vehicle's velocity and accelerations limits. The third level generates flyable, timed trajectories and the last one is the tracking controller that attempts to minimize the error between the robot measured trajectory and the reference trajectory.

This hierarchy is reflected in the structure and content of the book. Topics treated are: Modelling, Flight Planning, Trajectory Design and Control.  Finally, some actual projects are described in the appendix. This volume will prove useful for researchers and practitioners working in Robotics and Automation, Aerospace Technology, Control and Artificial Intelligence.