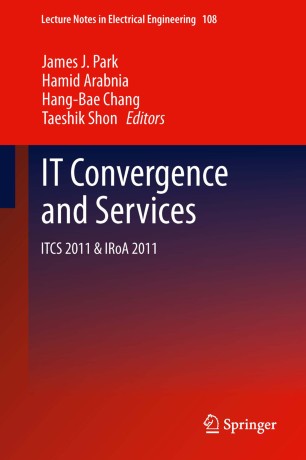 IT Convergence and Services

IT Convergence and Services is proceedings of the 3rd FTRA International Conference on Information Technology Convergence and Services (ITCS-11) and the FTRA International Conference on Intelligent Robotics, Automations, telecommunication facilities, and applications (IRoA-11). The topics of ITCS and IRoA cover the current hot topics satisfying the world-wide ever-changing needs.

The ITCS-11 will be the most comprehensive conference focused on the various aspects of advances in information technology convergence, applications, and services. The ITCS-11 will provide an opportunity for academic and industry professionals to discuss the latest issues and progress in the area of ITCS. In addition, the conference will publish high quality papers which are closely related to the various theories, modeling, and practical applications in ITCS. The main scope of ITCS-11 is as follows.

The IRoA is a major forum for scientists, engineers, and practitioners throughout the world to present the latest research, results, ideas, developments and applications in all areas of intelligent robotics and automations. The main scope of IRoA-11 is as follows.

Jong Hyuk Park received his Ph.D. degree in Graduate School of Information Security from Korea University, Korea. From December, 2002 to July, 2007, Dr. Park had been a research scientist of R&D Institute, Hanwha S&C Co., Ltd., Korea. From September, 2007 to August, 2009, He had been a professor at the Department of Computer Science and Engineering, Kyungnam University, Korea. He is now a professor at the Department of Computer Science and Engineering, Seoul National University of Science and Technology (SeoulTech), Korea. Dr. Park has published about 100 research papers in international journals and conferences. He has been serving as chairs, program committee, or organizing committee chair for many international conferences and workshops. He is President of the Future Technology Research Association International (FTRA) and Korea Information Technology Convergence Society (KITCS). He is editor-in-chief of International Journal of Information Technology, Communications and Convergence (IJITCC), InderScience and Journal of Convergence (JoC),  FTRA Publishing. He is Associate Editor / Editor of 14 international journals including 8 journals indexed by SCI(E). In addition, he has been serving as a Guest Editor for international journals by some publishers: Springer, Elsevier, John Wiley, Oxford Univ. press, Hindawi, Emerald, Inderscience. His research interests include security and digital forensics, ubiquitous and pervasive computing, context awareness, multimedia services, etc. He got the best paper award in ISA-08 conference and the outstanding leadership awards from IEEE HPCC-09 and ICA3PP-10. Dr. Park' s research interests include Digital Forensics, Security, Ubiquitous and Pervasive Computing, Context Awareness, Multimedia Service, etc. He is a member of the IEEE, IEEE Computer Society, KIPS, KICS, KIISC, KMMS, KDFS and KIIT.

Hamid R. Arabnia is an author, editor of research books, educator, and researcher. He received a Ph.D. degree in Computer Science from the University of Kent (Canterbury, England) in 1987. In 1987, he worked as a Consultant for Caplin Cybernetics Corporation (London, England), where he helped in the design of a number of image processing algorithms that were targeted at a particular parallel machine architecture. Arabnia is currently a Full Professor of Computer Science at University of Georgia (Georgia, USA), where he has been since October 1987. His research interests include Parallel and distributed processing techniques and algorithms, interconnection networks, and applications (in particular, in image processing and other computational intensive problems). Dr. Arabnia has chaired many national and international conferences and technical sessions in these areas; he is the chair of WORLDCOMP annual congress. He is Editor-in-Chief of The Journal of Supercomputing (which is one of the oldest journals published by Springer) and is on the editorial and advisory boards of 26 other journals and magazines. Dr. Arabnia is the recipient of William F. Rockwell, Jr. Medal for promotion of multi-disciplinary research (Rockwell Medal is International Technology Institute's highest honor). In 2000, Dr. Arabnia was inducted to the World Level of the Hall of Fame for Engineering, Science and Technology (The World Level is the highest possible level for a living person). He has received a number of awards, including, The Johns Hopkins University National Search (Certificate of Achievement) in recognition of his contributions to the national program for enhancing the quality of life for people with disabilities through the application of computing technology (presented to him in December 1991 - signatories: co-directors of the National Search and President of Johns Hopkins U.) In 2006, Dr. Arabnia received the Distinguished Service Award in recognition and appreciation of his contributions to the profession of computer science and his assistance and support to students and scholars from all over the world; this award was formally presented to him on June 26, 2006 by Professor Barry Vercoe (Massachusetts Institute of Technology / MIT). More recently (October 14, 2007), he received an "Outstanding Achievement Award in Recognition of His Leadership and Outstanding Research Contributions to the Field of Supercomputing". This award was formally presented to him at Harvard University Medical School (signatories: Lawrence O. Hall, President of IEEE/SMC; Zhi-Pei Liang, Vice President of IEEE/EMB; Jack. Y. Yang, General Chair of IEEE BIBE and Harvard University; Mary Qu Yang, Chair of Steering Committee, IEEE BIBE and NIH).

Hang-Bae Chang is a professor of Business Administration at Daejin University, Korea. He received his Ph.D. in Information System Management from Graduate School of Information at Yonsei University, Korea. He has published many research papers in international journals and conferences. He has been served as chairs, program committee or organizing committee for many international conferences and workshops; Chair of IPC '07, MUE '07, UASS' 08, UNESST '08, TRUST'08, FutureTech '10 and so on. His work has been published in journals such as Journal of Super Computing, Computing and Informatics, Journal of Mobile Information System, and EURASIP Journal on Wireless Communications and Networking. His research interests include issues related to Industrial Security Management and System, and Security Evaluation.

Taeshik Shon received his Ph.D. degree in Information Security from Korea University, Seoul, Korea and his M.S. and B.S. degree in computer engineering from Ajou University, Suwon, Korea. While he was working toward his Ph.D. degree, he was awarded a KOSEF scholarship to be a research scholar in the Digital Technology Center, University of Minnesota, Minneapolis, USA, from February 2004 to February 2005. From Aug. 2005 to Feb. 2011, Dr. Shon had been a senior engineer in the Convergence S/W Lab, DMC R&D Center of Samsung Electronics Co., Ltd. He is currently a professor at the Division of Information and Computer Engineering, College of Information Technology, Ajou University, Suwon, Korea. He was awarded the Gold Prize for the Sixth Information Security Best Paper Award from the Korea Information Security Agency in 2003, the Honorable Prize for the 24th Student Best Paper Award from Microsoft-KISS, 2005, the Bronze Prize for the Samsung Best Paper Award, 2006, and the Second Level of TRIZ Specialist certification in compliance with the International TRIZ Association requirements, 2008. He is also serving as a guest editor, an editorial staff and review committee of Computers and Electrical Engineering - Elsevier, Mobile Network & Applications – Springer, Security and Communication Networks - Wiley InterScience, Wireless Personal Communications – Springer, Journal of The Korea Institute of Information Security and Cryptology, IAENG International Journal of Computer Science, and other journals. His research interests include Convergence Platform Security, Mobile Cloud Computing Security, Mobile/Wireless Network Security, WPAN/WSN Security, anomaly detection algorithms, and machine learning applications.