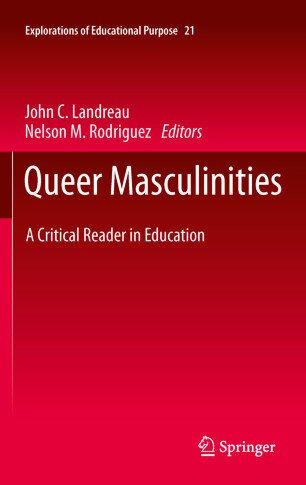 A Critical Reader in Education

Queer Masculinities: A Critical Reader in Education makes a substantial contribution to contemporary scholarship on gender and sexuality studies in education. Collectively the essays in this volume illuminate a broad range of queer practices and representations of masculinity in education, demonstrating that any serious study of masculinity must consider the theoretical and political contributions that the concept of queer masculinities makes to a more comprehensive and nuanced understanding of masculinity itself. In addition, Queer Masculinities encourages new approaches to educational theory and practice—while contributing more generally to knowledge production in the fields of critical masculinity studies and queer studies—by examining the complex interplay between queer masculinities and education.

The essays range from empirical studies to theoretical reflections, and address themselves to three separate educational realms: the K-12 level, the collegiate level, and the pedagogy of cultural production. Some of the essays focus on the disorienting presence of queer masculine student and teacher bodies in the K-12 or college classroom, and on the effects of queer performances of masculinity on classroom dynamics and on processes of learning. Others reflect on the challenges of actively queering pedagogical practice and research methodologies, and on its practical and theoretical rewards. Still others emphasize the cultural pedagogy of representations of queer masculinities in television, documentary film, and the novel, with special attention to the transformative possibilities inherent in those representations that challenge gender norms, or that make them strange or incoherent. Indeed,  for many of the authors, the performative complexities of dislocating, “unmapping,” or “stealing” masculinity form the backdrop for an impassioned reflection on the cultural and pedagogical necessity of such an endeavor. In all, this volume’s breadth and detail make it a landmark publication in the study of queer masculinities, in critical masculinity studies as a whole, and in educational theory and practice.

John C. Landreau is associate professor of women’s and gender studies at The College of New Jersey. His research interests include masculinity and the rhetoric of war, gender and literature, and Latin American masculinities. He has published previously on Peruvian and Andean literature and language.

Nelson M. Rodriguez is assistant professor of women’s and gender studies and of educational foundations and critical pedagogy at The College of New Jersey. He is also a research fellow at the Paulo and Nita Freire International Project for Critical Pedagogy, Faculty of Education, McGill University, Montreal, Quebec, Canada. His current research areas include LGBT and queer studies, critical masculinity studies, critical heterosexual studies, queer studies in education, and queer/trans pedagogies. His most recent publication (with William F. Pinar) is Queering Straight Teachers: Discourse and Identity in Education (2007). His forthcoming book (with Cris Mayo) is Queer Pedagogies: Theory, Praxis, Politics.

“This new edited collection by Landreau and Rodriguez helps demonstrate the rich potential of using gender and queer theories to examine educational practices and contexts. … For scholars and researchers … their introduction frames the text effectively and exposes the reader to the foundational theorists shaping the work in the volume. … For anyone with an interest in gender studies, queer theory, and their implications for educational scholarship, this volume would be a valuable starting point … .” (Elizabeth J. Meyer, Sex Roles, July, 2014)
Buy options