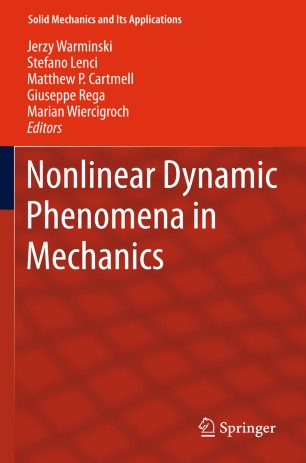 Part of the Solid Mechanics and Its Applications book series (SMIA, volume 181)

Nonlinear phenomena should play a crucial role in the design and control of engineering systems and structures as they can drastically change the prevailing dynamical responses.

This book covers theoretical and applications-based problems of nonlinear dynamics concerned with both discrete and continuous systems of interest in civil and mechanical engineering. They include pendulum-like systems, slender footbridges, shape memory alloys, sagged elastic cables and non-smooth problems.

Pendulums can be used as a dynamic absorber mounted in high buildings, bridges or chimneys. Geometrical nonlinearities introduced by pendulum motion may change the system dynamics, and entail a rapid increase of the oscillations of both the structure and the pendulum, leading to full pendulum rotation or chaotic dynamics. To magnetorheological damping is proposed.

Nonlinear mechanics has to be used to explain undesired response in slender footbridges, such as that occurred in the famous event of the London Millenium Bridge. The observed phenomena can be explained by an analytical nonlinear discrete-time model.

Non-smooth systems are very common in engineering practice. Three mechanical engineering problems are presented: (i) a vibro-impact system in the form of a moling device, (ii) the influence of the opening and closing of a fatigue crack on the host system dynamics, and (iii) nonlinear interactions between a rotor and snubber ring system.

This book is aimed at a wide audience of engineers and researchers working in the field of nonlinear structural vibrations and dynamics, and undergraduate and postgraduate students reading mechanical, aerospace and civil engineering.