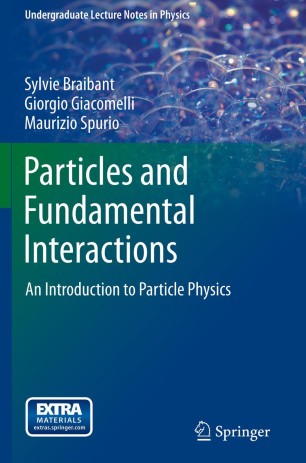 An Introduction to Particle Physics

This book aims to provide the basis of theoretical foundation and phenomenological knowledge of the structure of matter at the subatomic level. It starts by presenting the general concepts at the simplest level and does not require previous knowledge of the field, except for the basic quantum mechanics. The readers are gradually introduced to the increasingly more advanced topics, so that this text can accompany students all the way to their graduate and doctoral studies in experimental high-energy physics.
Special emphasis is placed on experimental and phenomenological aspects of the field and how measurements and theory interplay in the development of particle physics. The book is based on the authors’ undergraduate and graduate lecture courses at the University of Bologna, Italy.

^ 650 publications in scientific journals and over 350 reports and conference proceedings. He supervised 115 Laurea Theses, 30 PhD Theses.  He received prizes from the Italian Physical Society, the University of Bologna and from the A. Della Riccia Foundation. He is “Marchigiano of the year 2006”. In 1981 the Institute for Scientific Information (ISI) listed him in the “1000 Contemporary Scientists Most-Cited in 1969-78". He is presently in the Highly Cited list of ISI.
He was Director of the Institute of Physics, of the Department of Physics (1975-88) and President of the Laurea in Physics Committee of the University of Bologna. He was a member of many national and international scientific committees (SPSC, LEPC and ECFA at CERN, HEP at Fermilab, of INFN, of the ENI foundation, of CTS of ENEA, bioethics of CNR, of the Galvani Committee). Presently he is Emeritus Professor at the University of Bologna, collaborator of INFN and CERN, Fellow of the American Physical Society, Socio Benemerito of the Italian Physical Society, member of the European Physical Society, of the Accademia delle Scienze di Bologna, of the New York Academy of Sciences, and the Accademia Teatina. He is one of the Editors of the Journal “Astroparticle Physics”.