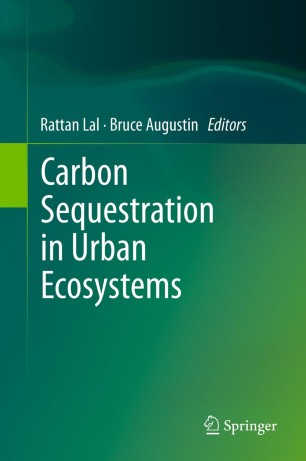 Rapid urbanization started since early 1950s. Among numerous consequences of urbanization are change in landuse and land cover including deforestation, encroachment of prime farmland, and alterations in landscape. These consequences reduce the ecosystem carbon stocks especially in biota and soils, alter the hydrologic cycle by increasing runoff and decreasing soil water storage, change energy budget by altering albedo, and disrupt cycling of carbon and other elements. Such drastic alterations in land use and land cover and biogeochemical cycling of C and other elements affect global climate at local, regional and global scales because of drastic and irreversible changes in the structure, functions and dynamics of ecosystems. The global urban expansion rate is estimated at ~2 million ha (Mha) of additional land to accommodate annual population growth of 70 to 80 millions. Because urban areas consist of build up areas and green areas or free space, judicious management of free space is crucial to moderating the global carbon cycle. Open spaces can be sustainably managed for home lawns, sports grounds, recreational areas, forests, and urban agriculture. Green roofs are also important in influencing the albedo and the carbon and hydrologic cycles. The strategy is to increase the green space areas, enhance their net primary productivity, and increase the overall carbon budget of urban ecosystems. It is also important to link science with policy.