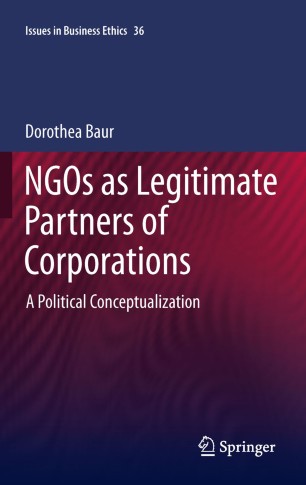 NGOs as Legitimate Partners of Corporations

The interaction between corporations and non-governmental organizations (NGOs) has become an important topic in the debate about corporate social responsibility (CSR). Yet, unlike the vast majority of academic work on this topic, this book explicitly focuses on clarifying the role of NGOs, not of corporations, in this context. Based on the notion of NGOs as political actors it argues that NGOs suffer from a multiple legitimacy deficit: they are representatives of civil society without being elected; the legitimacy of the claims they raise is often controversial; and there are often doubts regarding the legitimacy of the behaviour they exhibit in putting forward their claims. Set against an extended sphere of political action in the postnational constellation this book argues that the political model of deliberative democracy provides a meaningful conceptualization of NGOs as legitimate partners of corporations and it develops a conceptual framework that specifically allows distinguishing legitimate partner NGOs from two related actor types with whom they share certain characteristics but who differ with respect to their legitimacy. These related actor types are interest groups on the one hand and activists on the other hand. In conclusion it argues that a focus on the behaviour of NGOs is most meaningful for distinguishing them from interest groups and activists.