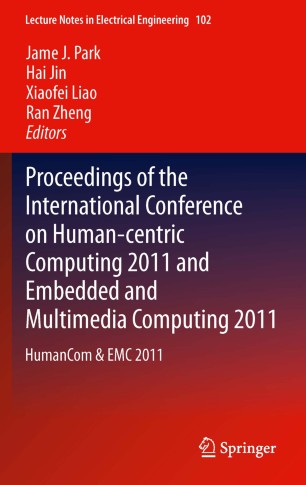 Proceedings of the International Conference on Human-centric Computing and Embedded and Multimedia Computing (HumanCom & EMC 2011) will cover topics of HumanCom and EMC, the current hot topics satisfying the world-wide ever-changing needs.

Human-centric computing is to create novel solutions so that the humans are always connected, portable, and available. As with pervasive-computing, human-centric computing requires a variety of devices; however, such devices exist simply to obtain inputs from the human and are embedded in objects that humans interact with on a daily basis. Moreover, during the past couple of decades, Information Science technologies influenced and changed every aspect of our lives and our cultures. Without various Information Science technology-based applications, it would be difficult to keep information stored securely, to process information efficiently, and to communicate conveniently.

Embedded computing ranges from portable devices such as digital watches and MP3 players, to large stationary installations like traffic lights, factory controllers, or the systems controlling nuclear power plants. Complexity varies from low, with a single microcontroller chip, to very high with multiple units, peripherals and networks mounted inside a large chassis or enclosure.

Jong Hyuk Park received his Ph.D. degree in Graduate School of Information Security from Korea University, Korea. From December, 2002 to July, 2007, Dr. Park had been a research scientist of R&D Institute, Hanwha S&C Co., Ltd., Korea. From September, 2007 to August, 2009, He had been a professor at the Department of Computer Science and Engineering, Kyungnam University, Korea. He is now a professor at the Department of Computer Science and Engineering, Seoul National University of Science and Technology (SeoulTech), Korea. Dr. Park has published about 100 research papers in international journals and conferences. He has been serving as chairs, program committee, or organizing committee chair for many international conferences and workshops. He is President of the Future Technology Research Association International (FTRA) and Korea Information Technology Convergence Society (KITCS). He is editor-in-chief of International Journal of Information Technology, Communications and Convergence (IJITCC), InderScience and Journal of Convergence (JoC),  FTRA Publishing. He is Associate Editor / Editor of 14 international journals including 8 journals indexed by SCI(E). In addition, he has been serving as a Guest Editor for international journals by some publishers: Springer, Elsevier, John Wiley, Oxford Univ. press, Hindawi, Emerald, Inderscience. His research interests include security and digital forensics, ubiquitous and pervasive computing, context awareness, multimedia services, etc. He got the best paper award in ISA-08 conference and the outstanding leadership awards from IEEE HPCC-09 and ICA3PP-10. Dr. Park' s research interests include Digital Forensics, Security, Ubiquitous and Pervasive Computing, Context Awareness, Multimedia Service, etc. He is a member of the IEEE, IEEE Computer Society, KIPS, KICS, KIISC, KMMS, KDFS and KIIT.

Hai Jin is a Cheung Kung Scholars Chair Professor of computer science and engineering at the Huazhong University of Science and Technology (HUST) in China. He is now Dean of the School of Computer Science and Technology at HUST. Jin received his PhD in computer engineering from HUST in 1994. In 1996, he was awarded a German Academic Exchange Service fellowship to visit the Technical University of Chemnitz in Germany. Jin worked at The University of Hong Kong between 1998 and 2000, and as a visiting scholar at the University of Southern California between 1999 and 2000. He was awarded Excellent Youth Award from the National Science Foundation of China in 2001. Jin is the chief scientist of ChinaGrid, the largest grid computing project in China, and the chief scientist of National 973 Basic Research Program Project of Virtualization Technology of Computing System.

Jin is a senior member of the IEEE and a member of the ACM. Jin is the member of Grid Forum Steering Group (GFSG). He has co-authored 15 books and published over 400 research papers. His research interests include computer architecture, virtualization technology, cluster computing and grid computing, peer-to-peer computing, network storage, and network security.

Xiaofei Liao received a Ph.D degree in computer science and engineering from Huazhong University of Science and Technology (HUST), China, in 2005. He is now an associate professor in school of Computer Science and Engineering at HUST. He has served as a reviewer for many conferences and journal papers. His research interests are in the areas of virtualization technology for computing system, peer-to-peer system, cluster computing and streaming services. He is a member of the IEEE and the IEEE Computer Society.

Ran Zheng received a Ph.D degree in computer science and engineering from Huazhong University of Science and Technology (HUST), China, in 2006. She is now an associate professor in school of Computer Science and Engineering at HUST. Her research interests are in the areas of high performance computing and its applications, image processing.