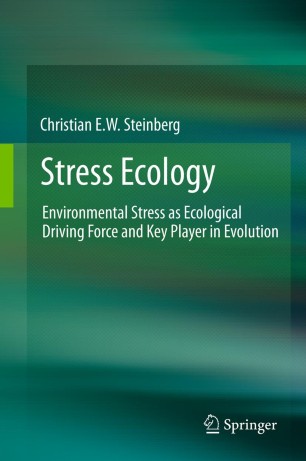 Not all stress is stressful; instead, it appears that stress in the environment, below the mutation threshold, is essential for many subtle manifestations of population structures and biodiversity, and has played a substantial role in the evolution of life.  Intrigued by the behavior of laboratory animals that contradicted our current understanding of stress, the author and his group studied the beneficial effects of stress on animals and plants. The seemingly “crazy” animals demonstrated that several stress paradigms are outdated and have to be reconsidered.

The book describes the general stress responses in microorganisms, plants, and animals to abiotic and biotic, to natural and anthropogenic stressors. These stress responses include the activation of oxygen, the biotransformation system,  the stress proteins, and the metal-binding proteins. The potential of stress response lies in the transcription of genes, whereas the actual response is manifested by proteins and metabolites. Yet, not all stress responses are in the genes: micro-RNAs and epigenetics play central roles. Multiple stressors, such as environmental realism, do not always act additively; they may even diminish one another. Furthermore, one stressor often prepares the subject for the next one to come and may produce extended lifespans and increased offspring numbers, thus causing shifts in population structures.

This book provides the first comprehensive analysis of the ecological and evolutionary effects of stress.