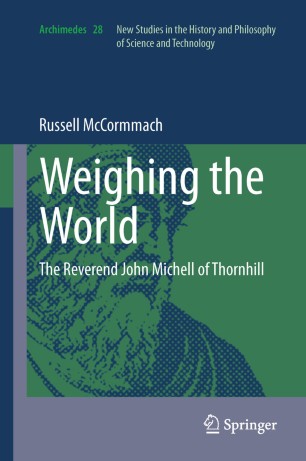 The Reverend John Michell of Thornhill

The book about John Michell (1724-93) has two parts. The first and longest part is biographical, an account of Michell’s home setting (Nottinghamshire in England), the clerical world in which he grew up (Church of England), the university (Cambridge) where he studied and taught, and the scientific activities he made the center of his life. The second part is a complete edition of his known letters. Half of his letters have not been previously published; the other half are brought together in one place for the first time. The letters touch on all aspects of his career, and because they are in his words, they help bring the subject to life. His publications were not many, a slim book on magnets and magnetism, one paper on geology, two papers on astronomy, and a few brief papers on other topics, but they were enough to leave a mark on several sciences. He has been called a geologist, an astronomer, and a physicist, which he was, though we best remember him as a natural philosopher, as one who investigated physical nature broadly. His scientific contribution is not easy to summarize. Arguably he had the broadest competence of any British natural philosopher of the eighteenth century: equally skilled in experiment and observation, mathematical theory, and instruments, his field of inquiry was the universe. From the structure of the heavens through the structure of the Earth to the forces of the elementary particles of matter, he carried out original and far-reaching researches on the workings of nature.