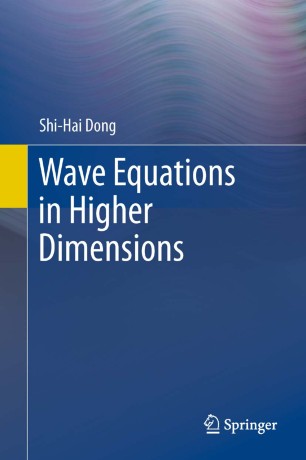 Higher dimensional theories have attracted much attention because they make it possible to reduce much of physics in a concise, elegant fashion that unifies the two great theories of the 20th century: Quantum Theory and Relativity. This book provides an elementary description of quantum wave equations in higher dimensions at an advanced level so as to put all current mathematical and physical concepts and techniques at the reader’s disposal. A comprehensive description of quantum wave equations in higher dimensions and their broad range of applications in quantum mechanics is provided, which complements the traditional coverage found in the existing quantum mechanics textbooks and gives scientists a fresh outlook on quantum systems in all branches of physics.
In Parts I and II the basic properties of the SO(n) group are reviewed and basic theories and techniques related to wave equations in higher dimensions are introduced. Parts III and IV cover important quantum systems in the framework of non-relativistic and relativistic quantum mechanics in terms of the theories presented in Part II. In particular, the Levinson theorem and the generalized hypervirial theorem in higher dimensions, the Schrödinger equation with position-dependent mass and the Kaluza-Klein theory in higher dimensions are investigated. In this context, the dependence of the energy levels on the dimension is shown. Finally, Part V contains conclusions, outlooks and an extensive bibliography.