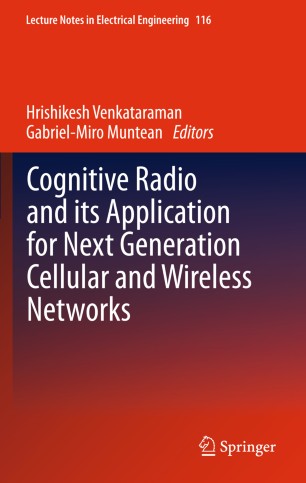 This book provides a broad introduction to Cognitive Radio, which attempts to mimic human cognition and reasoning applied to Software Defined Radio and reconfigurable radio over wireless networks.  It provides readers with significant technical and practical insights into different aspects of Cognitive Radio, starting from a basic background, the principle behind the technology, the inter-related technologies and application to cellular and vehicular networks, the technical challenges, implementation and future trends.  The discussion balances theoretical concepts and practical implementation. Wherever feasible, the different concepts explained are linked to application of the corresponding scheme in a particular wireless standard.

Dr. Hrishikesh Venkataraman is a senior researcher and Enterprise Ireland (EI) Principal Investigator with Performance Engineering Laboratory at the Irish national research center – The RINCE Institute, in Dublin City University (DCU), Ireland. He obtained his Ph.D. from Jacobs University Bremen, Germany, in 2007 for his research on wireless cellular networks. He obtained his master's degree from Indian Institute of Technology (IIT) Kanpur, India, in 2004 and did his master's thesis from Vodafone Chair for Mobile Communications, Technical University Dresden, Germany, from 2003 to 2004 under the Indo-German DAAD Fellowship. His research interests include mobile multimedia, wireless communications and energy in wireless. Dr. Venkataraman has published more than 40 papers in journals, international conferences and book chapters and has won a best paper award in World Congress on Engineering and Computer Science in University of Berkeley, USA, in October 2009. Currently, Dr. Venkataraman is an Executive Editor of European Transactions on Telecommunications (ETT) and is a founding member of UKRI chapter of IEEE Vehicular Technology Society.

Dr. Muntean has established a strong track record in the area of performance-aware data communications in heterogeneous network environments. Dr. Muntean is Director of the Network Innovations Centre of the RINCE Research Institute, co-Director of the Dublin
City University (DCU) Performance Engineering Laboratory, a top Irish research laboratory which has a state-of-the-art facility in the DCU Engineering building, and Lecturer with the School of Electronic Engineering at DCU, Ireland. Dr. Muntean has successfully supervised five Ph.D. and four master's research students and is currently leading a team of 15 postgraduate and postdoctoral researchers. Dr. Muntean has been principal investigator or collaborator on many Enterprise Ireland, Science Foundation Ireland and Irish Research Council for Science Engineering and Technology-funded projects. In addition, he has been leading or collaborating on projects funded or co-funded by multi-national and Irish companies such as IBM, Disney Research, Samsung, Microsoft, Everseen and Citadel 100. Dr. Muntean has authored one book and edited three others, has published eight book chapters, and has published over 30 journal and 150 conference papers in top international venues. Dr. Muntean has been awarded the 2010 Scott Helt Memorial Award for the Best Paper Published in the IEEE Transactions on Broadcasting and five best paper awards at different conferences. He is a member of the IEEE, IEEE Broadcast Technology Society and IEEE Vehicular Technology Society and serves as Associate Editor for the IEEE Transactions on Broadcasting.