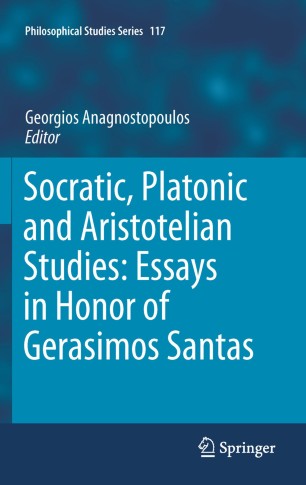 This volume contains outstanding studies by some of the best scholars in ancient Greek Philosophy on key topics in Socratic, Platonic, and Aristotelian thought. These studies provide rigorous analyses of arguments and texts and often advance original interpretations.

The essays in the volume range over a number of central themes in ancient philosophy, such as Socratic and Platonic conceptions of philosophical method; the Socratic paradoxes; Plato's view on justice; the nature of Platonic Forms, especially the Form of the Good; Aristotle's views on the faculties of the soul; Aristotle's functionalist account of the human good; Socratic, Platonic, and Aristotelian views on the nature of desire and its object. The volume will be of interest to students and scholars of ancient philosophy and classics.

Georgios Anagnostopoulos is a Professor of philosophy at the University of California, San Diego. He has authored Aristotle on the Goals and Exactness of Ethics (The University of California Press, 1994), edited A Companion to Aristotle (Wiley-Blackwell, 2009) and Law and Rights in the Ancient Greek Tradition (a Supplementary Volume of Philosophical Inquiry, 2006), and has published a number of articles on ancient Greek philosophy and medicine.

“Santas and his work have merited a Festschrift of this magnitude––fully 22 articles from a variety of scholars, most of whom who are established leaders in the field … . The articles are relatively even in their level of scholarship and philosophical discernment. EHGS will be most beneficial to those scholars of ancient Greek philosophy who specialize in Socrates, or in ancient moral psychology. Scholars interested in the Republic will also find many articles pertinent to their research.” (Patrick Mooney, Philosophy in Review, Vol. XXXIII (5), 2013)