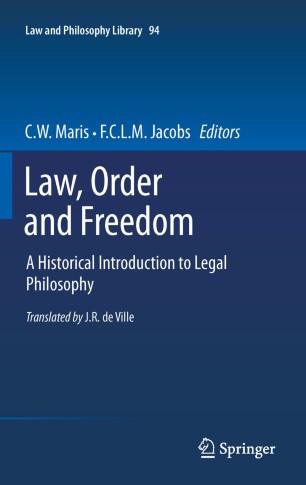 A Historical Introduction to Legal Philosophy

Law, Order and Freedom gives an account of the history of Western legal and political philosophy, starting with the pre-Socratics and ending with Rawls. It examines in detail the development of the Enlightenment values of freedom and equality, the foremost principles of many present-day constitutions. The underlying ideal of individual autonomy, characteristic of modern times, has nevertheless been contested throughout its history. Against the background of this historical development, Law, Order and Freedom enquires further whether the modern Enlightenment values can serve as a foundation for law and society in the modern era where a great diversity of worldviews exists.

Law, Order and Freedom will be an invaluable resource for those with an interest in legal and political philosophy.

Cees Maris is professor of legal philosophy at the University of Amsterdam. He is the editor of several journals in the fields of jurisprudence and philosophy. His main fields of research are the concept of liberty and its practical applications, multiculturalism, love, art, law and literature, and epistemology. Among his publications are A Critique of the Empiricist Explanation of Morality; Letters on Liberty; and Twelve Loves. He also wrote and brought on the stage the philosophical oratorio Horror Vacui (in cooperation with the composer José-Luis Greco) and the philosophical dialogue The Dance of Zarathustra.

Frans Jacobs is professor (emeritus) of philosophical ethics at the University van Amsterdam. His publications concern philosophers such as Aristotle, Spinoza, Hume, Kant, Schopenhauer, Mill, Habermas, Nozick and Nussbaum, and cover the themes of liberalism, paternalism, egalitarianism and nationalism, as well as toleration, civilized revenge, the meaning of life, the Homeric heroes, the difference between love and war, emotions in general and moral emotions in particular. His most recent book is A Philosophy of Emotions and Desires.

Jacques de Ville is professor of law at the University of the Western Cape, South Africa. His main fields of research are constitutional theory, deconstruction, and psychoanalysis. His publications include Constitutional and Statutory Interpretation; Judicial Review of Administrative Action in South Africa; and the forthcoming Jacques Derrida: Law as Absolute Hospitality.