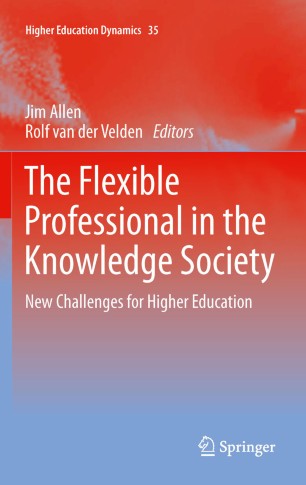 The Flexible Professional in the Knowledge Society

This volume presents in detail the results, and policy implications, of a crucial project that aims to help shape the future for millions of Europeans. Higher education policy has increasingly gained a supranational dimension in Europe, with a federalist perspective boasting growing influence over national education policies. Given the vital links between the framework of higher education and the economy, this comes as no surprise in a Europe of coalescing financial interests. Against this background a large-scale research project was launched to assess the demands made by a modern ‘knowledge’ society on graduates of higher education. Called the REFLEX Project, it also aimed to establish the degree to which Europe’s higher education institutions are up to the task of equipping graduates with the skills to meet these demands. Rather than focus solely on tertiary education institutions, the REFLEX Project also sought to analyze how the requirements of the wider economy—as well as graduates’ ability to fulfil them—are in turn influenced by the way in which the process of work is organized in institutions of employment.

It was a huge project undertaken across 16 nations, featuring a survey of Europe-wide proportions—with some 70,000 graduate respondees. In addition to setting out the findings of the survey, whose content constitutes the largest data set of any comparable undertaking, this in-depth report uses these results to infer vital matters of policy that will need to be assimilated by those individuals and social institutions which help fashion tomorrow’s education paradigm—including graduates and prospective undergraduates.  Whether consulted as a source of raw data or read as an influential intervention in the debate over education, this report deserves the widest possible readership.