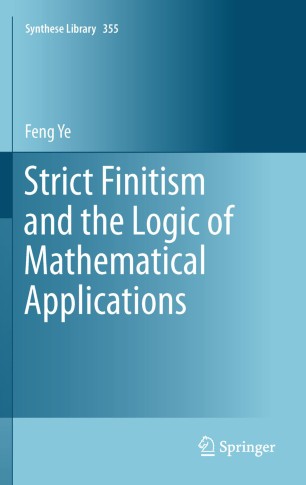 Strict Finitism and the Logic of Mathematical Applications

Both professional researchers and students of philosophy of mathematics will benefit greatly from reading this book.

Feng Ye is a professor of philosophy at Peking University, China. He has a B.S. degree in mathematics from Xiamen University, China, and a Ph.D. degree in philosophy from Princeton University, U.S.A.. His research areas include constructive and finitistic mathematics, philosophy of mathematics, and philosophy of mind and language. He used to prove, for the first time, a constructive version of the spectral theorem and Stone’s theorem for unbounded linear operators on Hilbert spaces. He is currently developing a radically naturalistic, nominalistic, and strictly finitistic philosophy of mathematics, a naturalistic theory of content, and a naturalistic interpretation of modality. His research articles have been published in The Journal of Symbolic Logic, Philosophia Mathematica, and Synthese, among others. He is also the author of the book Philosophy of Mathematics in the 20th Century: a Naturalistic Commentary (in Chinese, Peking University Press, 2010). His philosophical interests revolve around naturalism.

"Strict finitism is a very attractive view that has generally suffered just from the sense that it couldn't reproduce enough mathematics. This book takes strides toward removing that worry and making the view a viable alternative." James Tappenden, University of Michigan, Ann Arbor, U.S.A.
Buy options