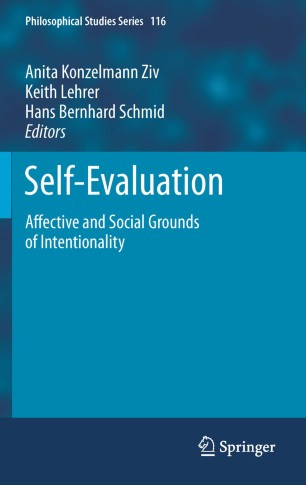 Affective and Social Grounds of Intentionality

This volume examines the affective and social dimensions of self-related activities. This is a novel way of approaching traditional questions such as the scope and purpose of self-knowledge, the interrelation between the social and the individual person, and the significance of emotional appraisal. Focusing on self-evaluation instead of self-knowledge in shifting from a doxastic to an axiological perspective. The scientific added value created by this approach is threefold: i) it opens up a broadr perspective on the structure of self-reflection which includes a matrix of values; ii) as valauations imply a social contaxt, it extends to social relations; iii) since affective attitudes are crucial for the recognition of values, it incorparates feelings and emotions. In short, self-evaluation is a conception of self-refelection which includes sociality and affectivity.

This volume contains contributions by leading figures in philosophy of mind and action, emotion theory, and phenomenology. It allows a global view on the most recent reflections on the subject matter, being of interest for professional philosophers, as well as for researchers from various nighboring disciplines.

Anita Konzelmann Ziv is assistant profesoor at the department of philosophy, University of Geneva (Switzerland) and works on the project ''Self-Evaluation - A Quest for Wisdom''. She wrote on the role of confidence and probability in the theory of knowledge of Bernard Bolzano, and more recently on collective moral emotions and virtue epistemology. Anita Konzalmann Ziv is grantholder of the ''Bourse d'excellence UNIGE 2010''', awarded by the University of Geneve, and member of ''Thumos'', the Genevean research group on emotion, values and norm.

Keih Lehrer (Ph.D.,Brown), Regents Professor of Philosophy, concentrates on epistemology, free will, rational consensus and Thomas Reid. He has been a fellow of the National Science Foundation, the National Endowment for the Humanities, the American Council of Learned societies, the John Simon Guggenhheim Foundation, the Center for Advanced Study , University of London, and the Research School, Australian National Univversity. He is a Fellow of the American Academy of Arts and Sciences, Research Professor of the University of Miami, and Honorary Professor and Honorary Doctor of the University of Graz, Austria.