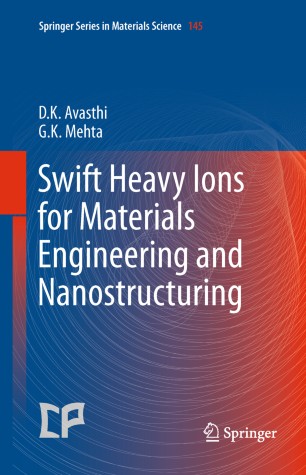 Ion beams have been used for decades for characterizing and analyzing materials. Now energetic ion beams are providing ways to modify the materials in unprecedented ways. This book highlights the emergence of high-energy swift heavy ions as a tool for tailoring the properties of materials with nanoscale structures. Swift heavy ions interact with materials by exciting/ionizing electrons without directly moving the atoms. This opens a new horizon towards the 'so-called' soft engineering. The book discusses the ion beam technology emerging from the non-equilibrium conditions and emphasizes the power of controlled irradiation to tailor the properties of various types of materials for specific needs.

Professor Girijesh Mehta is a Distinguished Honorary Professor of the Department of Physics of the IIT, Kanur, India. He received his Ph.D. from the University of Columbia, USA. He worked as a researcher at Brookhaven USA, Saclay-France and Harwell- U.K. In 1964 he joined the IIT in Kanpur and established a Nuclear Accelerator laboratory. He was Joint Director (1984) and Director (1988-2001) of the Nuclear Science Center (now Inter University Accelerator Center) in New Delhi and Vice Chancellor of the University of Allahabad (2001- 2004). Since 1983 he is a Fellow of the Indian National Academy of Sciences. Prof. Mehta has received several awards including the Excellence Corporate Award of the National Foundation of Indian Engineers and the Homi Bhabha Award for research in Applied Sciences in 1996.