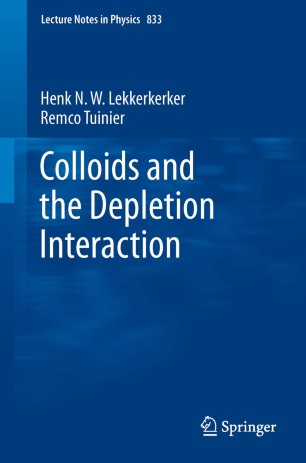 Colloids and the Depletion Interaction

Colloids are submicron particles that are ubiquitous in nature (milk, clay, blood) and industrial products (paints, drilling fluids, food). It has been known for a long time that adding salt or polymer influences the characteristics of colloidal suspensions. Think of the Egyptians who engineered ink by adding gum Arabic to soot particles a few thousand years ago. Unknowingly, they were taking advantage of the anchoring of the polysaccharides onto the colloids to provide the stabilization of the soot particles that eventually provided an ink to write on papyrus. The effect of charges and polymers attached to the surface of colloidal particles on their stability has been understood and studied extensively in the last century. But the more elusive, albeit ubiquitous, effects of the addition of free polymers and small colloids as depletants to colloidal dispersions have become in focus recently. In recent decades it has become clear that adding such depletants allows one to tune the interactions between the colloids and in this way control the stability, structure and rheological properties of colloidal dispersions. This book offers a concise introduction to the fundamentals of depletion effects and their influence on the phase behavior of colloidal dispersions. These fundamental principles promote insight and the intuitive sense needed to isolate issues related to depletion effects in technological problems and design critical experiments. In an introductory chapter, the authors provide a historical perspective and the applications of depletion effects not only in colloid science but also in biology, medicine and technology. In the subsequent chapter they address the basics of depletion interactions, including the effects of anisotropic depletants.  The next chapter covers the basics of phase behavior in colloidal dispersions, followed by extensions towards mixtures of spherical colloids with polymers or small colloids inducing depletion forces. Finally, the authors consider depletion effects in suspensions of rod-like colloids. Throughout the book, conceptual explanations are accompanied by experimental and computer simulation results. This is an ideal book for advanced undergraduates and graduate students in physical chemistry, chemical engineering and soft matter physics. It provides the basic knowledge of depletion interactions and phase behaviour in general. Experienced scientists and engineers working on polymers, particles or colloidal dispersions, may also find this book useful.