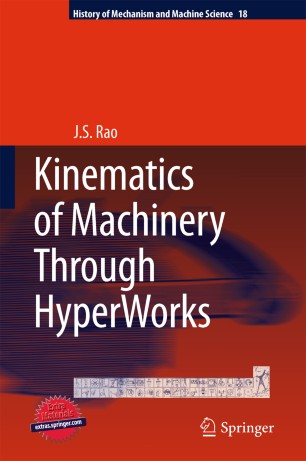 Kinematics of Machinery Through HyperWorks

Part of the History of Mechanism and Machine Science book series (HMMS, volume 18)

Usually this subject is introduced as a two-semester course, where kinematics and kinetics are taught simultaneously with

thermodynamics or heat engines before progressing to the design of machine members. This book provides the material for first semester of a Theory of Machines- course.

Th is book brings in the machine live onto the screen and explains the theory of machines concepts through animations and introduces how the problems are solved in industry to present a complete history in the shortest possible time rather than using graphical (or analytical) methods. Thus the students are introduced to the concepts through visual means which brings industrial applications by the end of the two semester program closer, and equips them better for design courses.

nomenclature and notation on Mechanism and Machine Science and this book adopts these standards so that any communication between scientists and in the classrooms across the world can make use of the same terminology. This book adopts HyperWorks MotionSolve to perform the analysis and visualizations, though the book can be used independent of the requirement of any particular software. However, having this software helps in further studies and analysis. The avis can be seen by entering the ISBN of this book at the Springer Extras website at extras.springer.com