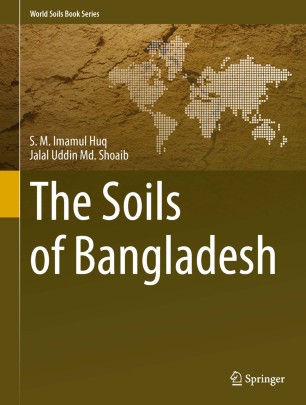 The Soils of Bangladesh

This book presents a comprehensive overview of the soils of Bangladesh. It is compiled by authors with vast experience in soil related problems and potential mitigation approaches. It discusses the development of Soil Science as an individual discipline in a country with limited resources and where soil plays a pivotal role for the economy; the formation of different agro-climatic regions; and the effects of human-induced soil degradation and climatic change on its soils, geology and geomorphology and major soil types. It examines 'problem soils' and how they are managed, the scenario of soil fertility status, and land and crop management, as well as focusing on the future soils.

Professor Dr. S.M. Imamul Huq graduated in Soil Science from the University of Dhaka and obtained M.Sc. degree in 1971. He did a second M.Sc. in the year 1980 from the Asian Institute of Technology (AIT), Bangkok, Thailand in Agricultural Soil and Water Engineering. He obtained his D. Engg. from the University of Nancy I, France in 1984 with specialization in stress metabolism in higher plants. Prof. Imamul Huq joined the University of Dhaka in 1973 as a Lecturer in Soil Science. He is now a selection grade Professor since 1992 in the Department of Soil, Water and Environment of the University of Dhaka. Prof. Imamul Huq is a bilingual. He teaches French language as a part-time teacher in the Institute of Modern Languages of the University of Dhaka. As a leading scientist of the country, Prof. Dr. S.M. Imamul Huq is involved in research on transfer of Arsenic from groundwater to the food chain. He has a well equipped laboratory with all facilities to work on problems related to Arsenic as well as different heavy metals. Prof. Imamul Huq is the founder director of the Bangladesh-Australia Centre for Environmental Research at the University of Dhaka. Prof. Imamul Huq is now working as the Chairman, Bangladesh Council for Scientific and Industrial Research (BCSIR). He has been chairing the Department of Soil, Water and Environment of the University of Dhaka from 18 August 2005 to 17 August 2008. With more than 200 publications to his credit in various International and National Journals, Prof. Dr. S.M. Imamul Huq has been awarded the prestigious Bangladesh Academy of Sciences Gold Medal for his outstanding contribution to the Agricultural and Biological Sciences. He has been awarded the 2007 Bangladesh UGC Award in the Physical & Biological Science/Agricultural Science for his work on Bioremediation of arsenic toxicity by algae in rice culture. He has also been honored as the best educationist by a local monthly magazine "Protifolon" in 2007. He has been elected as a "Distinguished Alumni" by the AITAA 2008. He has been awarded the "Bangabandhu Krishi Padak 2008" (Bangabandhu Agriculture Trophy) in the discipline of Soil and Environment and the "Bangabandhu Swadhinata Padak 2009" (Bangabandhu Independence Award 2009) in the discipline of Environment by the Bangabandhu Diploma Agriculture Association of Bangladesh. Prof. Imamul Huq has been the Chief Editor of Dhaka University Journal of Biological Sciences, Joint Editor of the Journal of the Asiatic Society of Bangladesh (Science), member of the editorial board of the Journal of Soil Science Society of Bangladesh and reviewer of many national and international scientific journals. He is the President of Soil Science Society of Bangladesh (SSSB) and the President of the Bangladesh Association for the Advancement of Science (BAAS). Prof. Imamul Huq has excellent supervisory and managerial experience in various Local and international projects funded by World Bank, ACAIR (by Australian and Bangladesh Govt.) and many other prestigious agencies. With excellence in conceptual thinking, problem-solving skills and common sense/pragmatism, Prof Imamul Huq has good communication skills, able to communicate effectively in writing and verbally and to explain complex concepts and analytic techniques.

“The book is mainly about the distribution, characteristics and classification of the soils. … The book is simply and generally clearly written. … The book is well produced with many coloured illustrations. … this book is very worthwhile, and I recommend it to the general reader, and especially to  those involved with alluvial soils and soil management in flood-prone areas and south Asia.” (Ian Baillie, European Journal of Soil Science, 2013)
Buy options