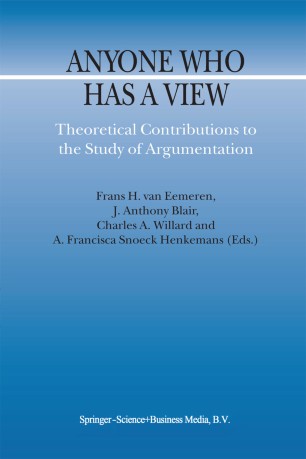 Anyone Who Has a View

Theoretical Contributions to the Study of Argumentation

This volume of the Argumentation Library contains a collection of twenty-six theor­ etical contributions to the study of argumentation. Together they provide an over­ view of recent developments in the theory of argumentation which does justice to the theoretical variety in the field. InAnyone Who Has a View, the subject of argu­ mentation is approached from different angles. Both the formal and informal logical approaches and the rhetorical and communicative approaches arc represented in various ways. We arc convinced that the collection of essays as a whole will be of interest not only to those engaged directly in the study of argumentation, but also to scholars from a variety of disciplines who arc interested in the recent developments in this field. The book opens with an essay by the informal logician Robert C. Pinto. For all the differences between them, James B. Freeman, Harvey Siegel, Ralph H. Johnson, Hans V. Hansen, and J. Anthony Blair are also prominent members of that move­ ment. Some informal logicians either eschew or simply do not use formal methods in their approach to argumentation, while others, such as David Hitchcock, use both formal and informal methods. Erik C.W. Krabbe is a logician who proudly defends a formal dialectical approach to argumentation. Daniel H. Cohen, Frans H. van Eemeren, Peter Houtlosser, Fred J. Kauffeld, C. Scott Jacobs, Christian Kock, Christian Plantin, Sorin Stati, Chris Reed, Douglas N.