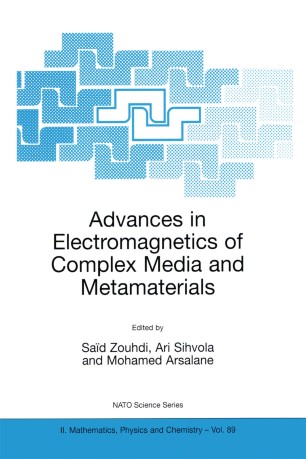 Advances in Electromagnetics of Complex Media and Metamaterials

The NATO Advanced Research Workshop Bianisotropics 2002 was held in th Marrakesh, Morocco, during 8-11 May 2002. This was the 9 International Conference on Electromagnetics of Complex Media, belonging to a series of meetings where the focus is on electromagnetics of chiral, bianisotropic, and other materials that may respond to electric and magnetic field excitations in special manner. The first of these meetings was held in Espoo, Finland (1993), and the following venues were Gomel, Belarus (1993), Perigueux, France (1994), State College, Pennsylvania, USA (1995), the rivers and channels between St. Petersburg and Moscow in Russia (1996), Glasgow, Scotland (1997), Brunswick, Germany (1998), and Lisbon, Portugal (2000). The present book contains full articles of several of the presentations that were given in the Marrakesh conference. In Bianisotropics 2002, 8 re­ view lectures, 14 invited lectures and 68 contributed talks and posters were presented. Of these presentations, after a double review process, 28 contributions have achieved their final form on the pages to follow. From the contributions ofthe meeting, also another publication is being planned: a Special Issue of the journal Electromagnetics will be devoted to complex materials. Guest editors for this issue are Keith W. Whites and Said Zouhdi. The chairmen of Bianisotropics 2002conference were Said Zouhdi (Pierre et Marie Curie University - Paris) and Mohamed Arsalane (Cadi Ayyad University - Marrakesh), who were assisted by Scientists from Moroccan Universities and the International Bianisotropics Conference Committee.