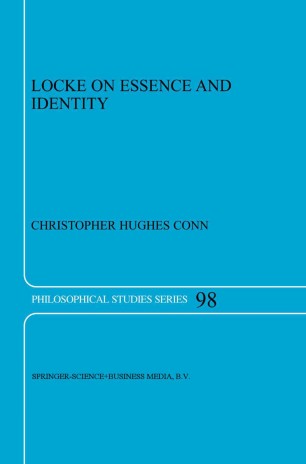 Locke on Essence and Identity

I first became interested in the relationship between Locke's anti­ essentialism and his theory of identity in a first-year graduate course on metaphysics taught at Syracuse University by Jose Benardete. I had until then approached Locke as a "safe", commonsense philosopher, whose metaphysical agenda-constrained as it was by his concept empiricism­ was largely geared towards upholding a scientifically enlightened, broadly Christian worldview. I am greatly indebted to Professor Benardete for disabusing me of this understanding of Locke's work. Benardete's Locke was not the Locke that I had been exposed to as an undergraduate, not the Locke that I had found in Copleston's History of Philosophy. Rather, he was a profoundly creative and audacious metaphysician, who was justly perceived to be a tremendously dangerous philosopher by his more traditional contemporarie s. And as much I had admired Copleston's Locke, I have become positively enthralled with Benardete's. The topics of identity and essentialism have become mainstays of contemporary metaphysics, and it is no understatement to say that Locke's contribution to modem debates on these matters is enormous. My early interest in Locke's work on essentialism and identity-through-time was motivated by two factors. First, although there are a number of obvious and significant conceptual connections between these topics, Locke's own theorizing about identity seems not to have been informed by his critique of essentialism or vice versa.