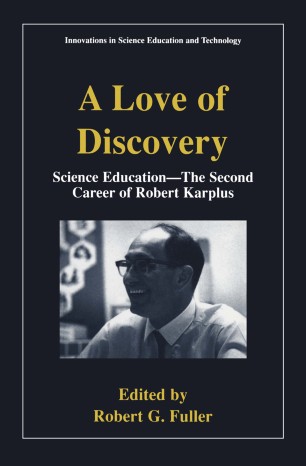 A Love of Discovery

Robert Karplus, a professor of physics at the University of California, Berkeley, USA, became a leader in the movement to reform elementary school science in the 1960s. This book selects the enduring aspects of his work and presents them for the scientists and science educators of today. In an era when `science education for ALL students' has become the clarion call, the insights and works of Robert Karplus are as relevant now as they were in the 1960s, '70s, and '80s. This book tries to capture the essence of his life and work and presents selections of his published articles in a helpful context.

"As A Love of Discovery makes clear, science education was Professor Karplus' second career but in no sense a lesser career. Since the 1960s, those of us whose only career has been in science education - as schoolteachers, university professors, or curriculum developers - have been deeply influenced by his theoretical and practical contributions to the field. Professor Fuller has produced a volume that deftly shows what those contributions were and why they were so influential. For today's teachers and scientists interested in science learning and science educators, this book is doubly valuable. First, each of the carefully made selections from the work of Bob Karplus is as relevant today as when first published, and as a collection it provides valuable insights on how to think about science learning scientifically and how to foster science education reform. Second, the essays written by colleagues who actually worked with Bob Karplus - and all who themselves have made outstanding contributions to science education - reveal from the inside and in personal terms how a brilliant physicist, knowing little at first about elementary school education, could become a pioneer and international leader in science learning at that level. How he discovered science education and became one of its greatest inventors is a story well worth telling and one well told in this volume."
(James Rutherford, Education Advisor, American Association for the Advancement of Science, Washington, DC)
"Those who were not privileged to know or work with Robert Karplus have Robert Fuller and his collaborators to thank for this volume, which gives the reader a sense of what it was like to work with someone for whom the discovery process was central to his world-view."
(Alan M. Portis, Professor Emeritus, Dept. of Physics, University of California, Berkeley)
"Bob Karplus was an outstanding scientist, visionary educator, and close friend. A colleague at Berkeley, Dr. Karplus inspired me to become active in elementary science teaching and reform during my career as a professor at Berkeley and Calvin College. His inspiration continues to drive my work in Congress, and his groundbreaking ideas serve as the foundation for my science education legislation. Read this book; it will help you make science come alive for America's children."
(Vernon J. Ehlers, PhD and Member of Congress)
Buy options