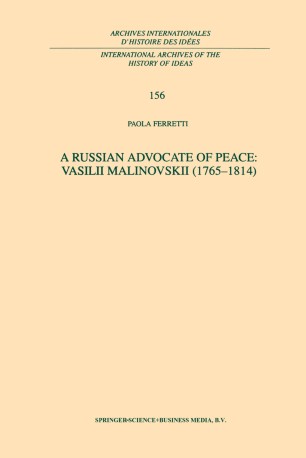 Vasilii Fedorovich Malinovskii (1765-1814) is a name which has hitherto lacked true resonance in the history of Russian culture. Tt is of course a name known to all students of Alexander Pushkin's biography, for Malinovskii was the first Director of the new Tsarskoe Selo Lyceum, if, sadly, for only the first three of the young poet's years at the school. For those scholars conversant with the intellectual and literary life of the "beautiful beginning" of the reign of Alexander I's reign Malinovskii has his little niche for his remarkable Rassuzhdenie 0 mire i voine (1803) and less for his Osennie vechera (1803), a little-known journal limited to a mere eight weekly issues and written entirely by the editor. As regards the of his 'eighteenth-century' Malinovskii, who lived the first thirty-five years life predominantly in the reign of the great Catherine, little information encumbers the memory of even specialists of the period. Indeed, his elder brother, Aleksei Fedorovich (1762-1840), is the more likely to be remembered for his literary and translating work as well for his later position as Head of the Moscow Archive of the Ministry of Foreign Affairs, which brought him into contact with Pushkin and, not unexpectedly, with Karamzin. Karamzin referred to him as "one of my few old and genuine friends", but one searches in vain for a similar accolade for VasiIii Fedorovich.