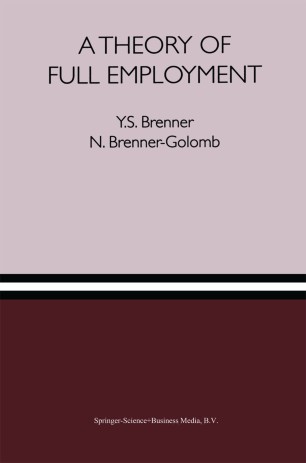 A Theory of Full Employment

This book has three purposes. First, to convince professional economists who study the behaviour of the economic system as a whole that they must re-examine some of the assumptions behind the reigning economic theories. Second, to explain to the general public why the currently fashionable economic policies cannot solve the problem of massive long term unemployment. Third, to show that if people's political engagement is revived there is hope for escaping from the economic morass and moral wasteland into which, ever since the 1970s, the fashionable policies have been leading us. To elucidate the theoretical problem the authors pass in review several recent structural developments and consider their effect on the economy. To encourage renewed public political engagement they draw attention to the risks involved in allowing things to drift on in the present direction. The avowed purpose of the book imposes the need to present it in a manner accessible at once to professional macroeconomists and to a wider public ofpeople concerned about today's malaise, politicians, sociologists or philosophers and others. This imposes the need not to encumber readers with the customary glut of academic references in the text, and to refer only to the best known and politically most influential theories and to authors who are also widely known to people who are not professional economists.